What’s the first thing you notice when you look at a blueberry or a cranberry or a raspberry? Our eyes usually pick up on the vibrant colors that are painted all over these seasonal fruits. And perhaps there’s a good reason why these colors draw our attention. You see, many of the health promoting substances in berries are present because of the pigments that make them so distinctive.

Contained within berries are naturally occurring chemicals called anthocyanins. The word anthocyanin (ann-tho-cy-ann-in) is derived from the Greek language and loosely translates to: “blue flower”. In the plant world, anthocyanins are the substances that give plants their blue, purple and reddish colors. They also function to attract bees to pollinate them and animals to help spread their seeds. In humans however, these valuable phytochemicals (plant-based chemicals) serve many other functions. Today, I’m going to explore some of the lesser known benefits of the berry family. 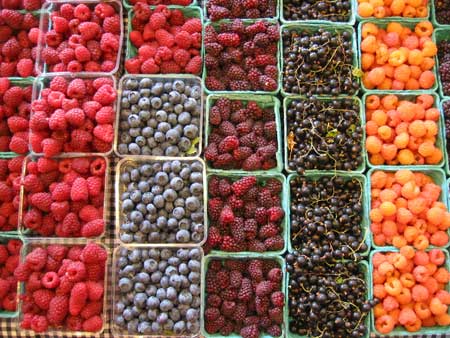 A brand new study from the Ohio State Comprehensive Cancer Center has affirmed that a black raspberry extract (containing anthocyanins) was capable of halting the growth of esophageal cancer in rats. This same extract also promoted cell death in the cancerous cells.

This study was initially conducted because previous research had already established that raspberry extracts selectively killed esophageal and other cancer cells in a laboratory setting. This current research adds further support to the potential of black raspberries against this deadly form of cancer.

Whenever possible, it’s better to rely on human clinical trials (as opposed to animal trials). Fortunately, in the case of black raspberries, we do have a recent human trial to consult.

In June of 2008, a study was published in the journal Cancer Research. In that trial, a gel that contained 10% black raspberry extract was applied to “premalignant oral lesions” in humans. These are spots that are vulnerable to becoming cancerous. The application of the black raspberry gel lead to favorable changes in these pre-cancerous growths and thereby combated the growth of these dangerous lesions.

Late last year, an experiment was undertaken to determine if adding blueberries to the diet (of rats) would have any effect on their bone density. The researchers explored this by inducing menopause in two groups of rats. Afterward, one group was given a typical diet. The other group received a diet that contained 5% blueberries.

The rats that received the typical diet lost about 6% of their bone mineral density (BMD) over the course of 100 days. The blueberry-eating group did not suffer the same loss. By performing specific blood tests, the researchers determined that blueberries appeared to “increase bone turnover”. The authors concluded that “blueberries can prevent bone loss as seen by the increases of BMD and favorable changes on biomarkers of bone metabolism”.

Juice is Good for Blood Sugar?

You’ve probably heard a doctor or nutritionist say that fruit juice isn’t much better than soda. After all, it contains nearly the same amount of sugar per serving. Well, technically that’s true. But, there are exceptions to the rule. Here’s one of them.

In June of 2008, scientists at Winona State University in Minnesota, published a study that documented the effects of various beverages on blood sugar levels. They tested several different drink options: 1) no beverage at all, 2) plain water, 3) unsweetened cranberry juice, 4) sweetened cranberry juice and 5) water mixed with high fructose corn syrup (“sugar-water”). Here’s what they found:

How could unsweetened juice affect blood sugar and insulin identically to plain old water? The researchers theorize that the naturally occurring antioxidants and other phytochemicals in pure cranberry juice could be, “associated with a favorable glycemic response and may be beneficial for persons with impaired glucose tolerance”.

You’re probably aware that pure cranberry juice is pretty tart. The way I get around this issue is by diluting the pure juice with some water and adding a small amount of stevia to it. This helps to mildly sweeten the drink while effectively knocking out most of the tartness as well.

There’s been a lot controversy over the past decade about whether or not it’s worth buying organic fruits and vegetables. There are often good arguments to be made on both sides of this issue. That’s why I like to rely on science when it comes to complicated matters such as this.

The USDA (United States Department of Agriculture) recently released the results of testing done on both conventionally-grown and organically-grown blueberries. This particular test was devised to determine if there was any significant difference in the antioxidant content of each of these forms of blueberries.

Random blueberry samples were taken from “late harvest fields” in New Jersey. This time, there could be no controversy in the USDA’s findings. The organic blueberries were shown to be higher in malic acid, phenolics (a type of antioxidant), anthocyanins and total antioxidant activity. All of these substances are thought to be major players in the health-promoting effects of blueberries.

The term “super food” is thrown around frequently these days. In the case of berries, that term actually fits quite well. Berries are rich in antioxidants, fiber, nutrients and they’re relatively low in calories and sugar. They’re easy to find year round, whether fresh or frozen. And perhaps most importantly, eating them feels like a treat. I suggest you treat yourself right and include more berries in your diet.