Stevia – The Safe and Natural Sweetener

If you’ve gone shopping lately and looked around the sweetener section, you may have seen a few new faces on the block. Products like Truvia and ZSweet are popping up all over the country and beyond. But what are they really? And are they really safe?

The Sour Side of Sweetness

Artificial sweeteners have been a regular part of the Standard American Diet for many years. These calorie-free sweeteners have names like NutraSweet, Sweet’N Low and Splenda. The supposed upside of these sweetening agents is that they’re virtually calorie-free, safe for diabetics and don’t promote weight-gain. All of these products have also been safety approved by the FDA (the Food and Drug Administration). The trouble is, if we dig a little deeper, the reality of these products don’t appear quite so appetizing.

First let’s take a look at some of the adverse effects that have been reported with some of the most popular non-nutritive sweeteners:

Acesulfame K (Ace-K or Sunett) – This sweetener contains small amounts of a substance called methylene chloride. It is known that long-term exposure to this substance can cause a variety of health consequences, such as: cancer, confusion, depression, headaches, kidney and liver damage and visual problems. So naturally, there is some concern about frequent usage of this sugar substitute.

Aspartame (Nutrasweet or Equal) – This is perhaps the most controversial of all artificial sweeteners. One physician, Dr. H.J. Roberts, noted that many of the complaints made to the FDA (about food additives) had to do with aspartame. The symptoms attributed to it are extremely broad. They include: dizziness, headaches, joint pain, memory and mood disturbances, nausea, changes in eyesight and tinnitus (ringing in the ears). And that may just be the tip of the iceberg.

Saccharin (Sweet’N Low) – Concerns have been raised about its role as a possible carcinogen (a cancer causing agent). It has also been associated with allergic reactions, such as headaches, breathing problems, stomach distress and skin eruptions.

Sugar Alcohols (Erythritol, Maltitol, Sorbitol, Xylitol) – Sugar alcohols are actually natural sweeteners. But, higher dosages are notorious for causing stomach problems. It’s generally recommended that you use them cautiously and sparingly. In smaller dosages, they appear to be relatively safe.

Sucralose (Splenda) – Many people associate sucralose as being “natural” or close to it. The reason is that it’s partially made with sugar. But it also contains chlorine, which is a known carcinogen. There have been reports of skin and stomach issues relating to sucralose use. In addition, some incidents of breathing problems, coughs, heart issues (such as irregular heartbeats) and mood swings may also be associated with this approved sweetener.

One of the biggest controversies to emerge over the past few years is whether artificial sweeteners may in fact promote weight gain. That’s right, promote it. How could this be? Most of these sweeteners are either calorie-free or very low in calories. They’re certainly much lower in calories than sugar or high fructose corn syrup. And what’s more, they’ve been promoted for many years as a way of helping to manage weight!

A study from back in 2004 put forth a surprising observation. It turns out that sugar substitutes may negatively impact the brain’s ability to count calories and perceive sweetness. Instead of satisfying our desire for a little something sweet, these sweeteners may actually drive us to eat more sugary foods and drinks.

In 2008, another study was published that further supported this hypothesis. In the 2008 study out of Purdue University, a group rats was fed either sugar sweetened yogurt or artificially sweetened (saccharin) yogurt. After the rats were fed their respective yogurts, the researchers observed their eating habits. This is what they noted:

As a side note, a hugely influential fellow blogger, Jimmy Moore, has recently found weight loss success by reducing the quantities of artificial sweeteners in his diet. His story is really fascinating and definitely worth exploring. 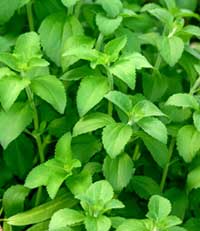 Stevia to the Rescue?

This past year has been a very significant year for a little Paraguayan plant. Stevia is a no-calorie, all natural sweetener taken from the leaves of the Stevia rebaudiana plant. It’s been used for culinary and medicinal purposes for over 200 years – mainly in South America. It has also been commercially available as a sweetener in Japan for over 30 years.

The US has been slower to accept this herbal sweetener. For more than a decade, stevia has been allowed to be sold as a “dietary supplement”, but not as a food additive nor was it permitted in foods. The FDA didn’t grant stevia a seal of safety because it wanted to see more scientific proof. In theory, this sounds like a reasonable request by the FDA. The problem is that scientific research is expensive and stevia is a natural substance. Therefore, you can’t patent it nor can you profit from investment in it as you can with an artificial sweetener.

Thankfully, the consumer demand for stevia has been so strong and so steady that big corporations recently began to show an interest in the leaves of this humble plant. Industry giants like Coca Cola and Cargill and PepsiCo both announced that they intended to invest in new stevia products. With such strong financially backing, scientific testing became a real possibility. The results of those tests have led the FDA to finally allow stevia to be sold as a stand alone sweetener and included in lower-calorie foods and drinks.

Here are some highlights from the recent safety studies:

The exact stevia extract used in this batch of safety testing is sold under the product name Truvia.

Other countries are also becoming more comfortable with the thought of stevia as a safe sugar alternative. Earlier this year, Australia approved it’s use in beverages and foods.

In addition to the official governmental approvals, many alternative health doctors have also given stevia their stamp of approval. Dr. Andrew Weil and Dr. Ray Sahelian are two well regarded doctors who attest to its safety.

Your Body, Your Science Experiment

So what are the main differences between stevia and other sugar alternatives? For me it really comes down to a few key points. Firstly, stevia has a long history of safe, traditional use. In fact, there’s a considerable amount of research that indicates that stevia may even confer health benefits, as opposed to health risks. Secondly, I tend to prefer natural options. I think that ancient plants are more likely to be compatible with our bodies than newly invented chemicals that are cooked up in laboratory by scientists who hope to profit from their new inventions.

But, I want to make one thing clear. The bottom line is how any given substance affects you as an individual. If you try something natural, such as stevia, and you notice a negative effect, stop taking it. Just because something is natural doesn’t necessarily mean that it’s right for you.

I personally use stevia in moderation – about two packets a day. I haven’t noticed any ill effects while using it (for several years now). Even so, I still try to limit my amount of sweets. As as result, I simply don’t crave very sweet drinks or foods anymore, which I believe is a sign of good health. That’s what works for me. I wish you all the same good health, no matter which road to sweetness you decide to take.


10 Comments & Updates to “Stevia – The Safe and Natural Sweetener”