The old saying goes, “An apple a day keeps the doctor away”. Well I’ve found some new research that may add to the good reputation of apples. After reading today’s blog, the new saying may be, “An apple a day, keeps overeating at bay”.

Apples are a wonderful source of fiber, nutrients and phytochemicals (healthful, plant-based chemicals). But we often think of them as simply being a healthy snack or dessert option (think apple cobbler or apple pie). In any event, we generally don’t consider eating apples prior to meals. Maybe we should reconsider. 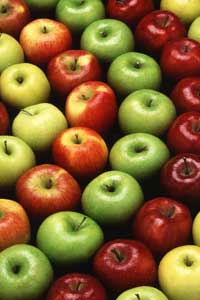 A Fuji or Granny Smith for Leaner Times

In December of 2008, an interesting study appeared in the journal Appetite. The goal of the study was to determine if having an apple prior to a meal could decrease overall food intake.

The authors of the experiment asked a group of 58 volunteers to consume apples in several different forms: a) the whole fruit, b) applesauce, c) apple juice, d) apple juice with added fiber and e) no apple at all. The trial lasted a total 5 weeks.

At the beginning of each week, the volunteers were fed a different form of apple. The researchers then asked them to wait 15 minutes prior to eating their meal. The participants were allowed to eat as much as they wanted during the meal. After they finished eating, the researchers measured how many calories were consumed.

Once the experiment was completed, the researchers tabulated their findings and reached the following conclusions:

Earlier in 2008, a similar study was published in the same journal. This time, a trial was conducted on 49 overweight women with ages ranging between 30-50 years of age. The women were divided into three groups. One group was asked to eat three apples a day. The second group was assigned three pears a day. The third group was given three oat cookies for daily consumption. All of these snacks contained approximately the same amount of fiber per serving (6 grams).

The three groups were asked to eat these snacks in addition to their regular diets for a total of 10 weeks. At the end of that period, the authors of the study reported that:

Is this the missing link we’ve all been waiting for? The final, elusive piece to the weight loss puzzle? I’m afraid not. But, I’d much rather see people eating more apples than overeating or using potentially dangerous hunger suppressants. And the beautiful thing is that apples tend to have many side benefits. For instance, I spent part of today researching several studies that indicate a possible anti-cancer effect to these powerful fruits.

PS – I used to have a horrible problem with my appetite which was out of control. My solution has been eating a whole food based, low carbohydrate diet. By eating that way, I’ve been able to manage my hunger and lose a considerable amount of weight (40+ pounds and counting). This may be an even better option for some people.