When investigating natural healing techniques, one must frequently consult with two disparate camps: scientists and traditional healers. Generally speaking, scientists attempt to debunk or explain how a practice works (or doesn’t) via established mechanisms and objective data. Traditional healers tend to offer an alternative view about how the body functions and historical accounts of success. When these two groups come together, quite often some degree of common ground can be found. A case in point is the ancient Indian practice known as oil pulling. 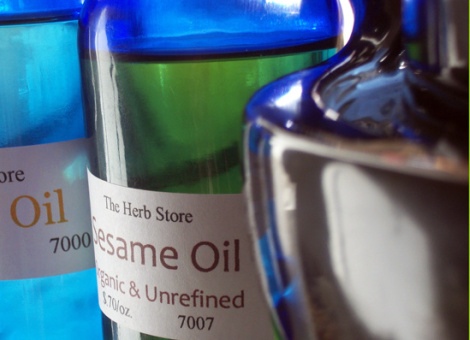 One of the first documented descriptions of oil pulling can be found in the ancient Ayurvedic text Charaka Samhita where it is described as “Gandusha” and “Kavala”. Modern Ayurvedic healers claim that oil pulling can cure or improve “about 30 systemic diseases ranging from headache, migraine to diabetes and asthma“. These are rather bold and unexpected claims for a practice that essentially calls for swishing around a small amount (about a tablespoon) of sesame oil in your mouth for 10 to 15 minutes. The idea is to “pull” the viscous liquid in between your teeth and agitate it until it turns a “milky white” color, at which point, you spit it out.

Scientists aren’t ready to accept many of the assertions made by Ayurvedic healers with regard to oil pulling. However, several studies of late lend some scientific support for it in relation to the promotion of oral health. The latest trial compared the effects of oil pulling versus rinsing with a prescription mouthwash in patients with chronic bad breath (halitosis). The findings of the two week intervention determined that oil pulling therapy was as effective as chlorhexidine mouthwash in terms of improving halitosis and reducing the number of bacteria that contribute to it. Additional research has found that pulling with sesame oil also reduces symptoms of gingivitis and plaque formation. The primary pathway by which oil pulling seemingly improves oral health is by decreasing the number of cariogenic and pathogenic microorganisms including Streptococcus mutans.

There are other reasons to consider the alternative practice of oil pulling. A recent review pointed out that rinsing with sesame oil may present certain advantages as compared to modern mouthwashes. For instance, oil pulling is cited as being all natural, causing no staining, inexpensive and having low allergenic potential. Even so, Dr. Andrew Weil (and other friendly figures in the integrative medical community) is only willing to give a luke warm endorsement of oil pulling. This is largely because of the limited amount of scientific data currently available to back up many of the traditional claims. Also, I don’t know how many people are willing to swish with sesame oil for 10 to 15 minutes each and every morning – usually before breakfast and brushing. Having said all that, if you happen to have a vexing oral health issue that isn’t responding to other treatments, I think it’s certainly worth reaching for a bottle of sesame oil.