Do you exercise? Are you planning on starting an exercise program? In either case, you’ll want to exercise in the most efficient way possible. In today’s blog, I’ll provide some new research that may help you construct a more effective exercise regime.

Use It to Lose It

A report was just released in the Archives of Internal Medicine that attempted to determine the best form(s) of exercise for sedentary, overweight seniors.

The researchers focused on senior citizens for several reasons: 1) Seniors tend be less active than the younger population. 2) They are more likely to suffer from insulin resistance. Insulin resistance is a precursor to diabetes and can play a role in many serious health conditions like cardiovascular disease. 3) Seniors often have “functional limitations”. In other words, it’s more likely for them to have a difficult time moving around and participating in everyday physical challenges.

The group of 136 was divided into four segments:

Overall, the combination exercise program was deemed the most advantageous. The researchers commented that, “It is difficult to imagine a more effective strategy for improving overall health  in the elderly”. 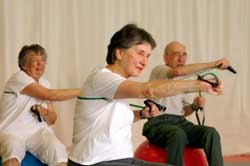 There’s no replacement for exercise. And the information presented above is very encouraging. Having said that, some brand new research published in the February 2009 issue of the Journal of Nutrition may add a little something extra to the mix.

The title of the study pretty much sums it up: “Green Tea (Catechin) Consumption Enhances Exercise Induced Abdominal Fat Loss in Overweight and Obese Adults”.

What the title doesn’t tell you is that the researchers also discovered that the weight loss apparently had nothing to do with the caffeine content in the green tea. That’s a theory that some people have about why green tea aids weight loss. The green tea users also managed to lower their triglycerides significantly during the course of the 12 week study – a serious boost for heart health.

I love learning about practical information, and when it comes to health, I love it even more. So often, in medicine and nutrition, we’re left to guess about what’s best for us.

Today I’ve shared some information that you could conceivably use to improve your state of health and the quality of your life. Please consider putting it to use. Talk to your doctor about it. Go to your local senior center and see if they offer such exercise programs. Search out the resources that will help to keep you well and, possibly, even regain a greater sense of wellness.

PS – For my younger readers, please grab hold of your mid-section. Can you squeeze a good handful (or two) of a soft, squishy substance? If so, you can very well benefit from this same type of exercise routine.

Fat in the abdominal area is sometimes an indication of insulin resistance. Nobody, at any age, needs or wants that. Please do your best to address this potential health risk sooner rather than later.