Natural Ingredients for a Healthier Smile

A few weeks ago I wrote a column about xylitol’s beneficial effect on the health of teeth and gums. But there are many other natural extracts that you’ll probably see in oral care products in the coming years. Ironically, many of these natural substances are derived from sweet fruits. Today I’m going to present a brief overview of three up and coming natural ingredients that will soon be appearing in a toothpaste or mouthwash near you.

There was a study published earlier this month in the journal Phytotherapy Research on the effects of a pomegranate infused mouthwash. It appears that the researchers used a very simple recipe to make this mouthwash. They dissolved an undisclosed amount of pomegranate extract (which did not contain any calories or sugar) into pure water.

A group of young men and women used this pomegranate mouthwash three times a day for 4 weeks. Another similar group of volunteers used a placebo mouthwash as a comparison The researchers, based at Ohio State University, concluded the following at the end of the trial:

The results of this study prompted the researchers to conclude that, “pomegranate components have properties that could promote oral health, including reducing the risk of gingivitis”. Gingivitis is a form of inflammation of the gums that can lead to more serious gum and dental problems if left unaddressed.

In September of 2008, a study out of the Illinois University College of Dentistry found that grape seed extract (GSE) could help remineralize cavities. This particular kind of trial is called an “in vitro” study. It was conducted in test tubes in a laboratory setting – not in humans. Therefore the results are considered to be preliminary, but promising. 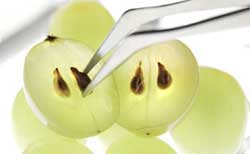 One interesting side note about this research is that the scientists compared the effects of fluoride vs. GSE in part of the experiment. And in some ways, the GSE actually outperformed fluoride. This is relevant because there is some concern about the safety of fluoride.

Another fruit that is attracting much attention from the dental community is cranberry. There are now several studies that attest to its possible utility in supporting oral health.

One of the studies highlights an anti-inflammatory effect of cranberry juice extract on gum tissue. If inflammation of the gums can be controlled, the progression of gum disease may also be controlled to a greater extent. This can lead to healthier gums that are less likely to recede and will better support the teeth.

A separate study found that certain phytochemicals (plant chemicals) in cranberries could help reduce the adherence of bacteria to the surface of teeth. The adherence of harmful bacteria to our teeth plays a major role in the process of tooth decay. If this step can be countered, cavities will become a much rarer occurrence.

These studies suggest the powerful multi-faceted effect that cranberry could have in helping with the prevention, and possibly, the management of oral health. More research is certainly warranted in this area.

The next time you go to your local health food store, take a look at the wide array of toothpastes, dental flosses and mouthwashes. When you do, keep a special lookout for the ingredients that I covered today. They just may help keep your pearly whites in the best possible shape.


5 Comments & Updates to “Natural Ingredients for a Healthier Smile”