Acupressure is technique used in Traditional Chinese Medicine (TCM) that is quite similar to acupuncture. Instead of needles, instruments or fingers apply direct pressure on specific points of the body in order to alleviate symptoms or to support various organs or systems of the body.

Acupressure is widely used in Asia, but it hasn’t been fully accepted by the Western medical establishment. Part of the reason is that Western medicine uses science as the predominant method for determining whether a practice or therapy is effective. For most of acupressure’s history, it has relied on non-scientific word of mouth for its positive reputation.

In recent years, however, both Eastern and Western medicine have worked together to scientifically test the efficacy of this form of physical therapy. Today I’m going to share some of the current findings on this ancient practice. In particular, I want to focus on chronic conditions that may benefit from this safe and natural practice. 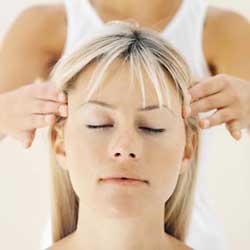 Dysmenorrhea refers to a pain condition that accompanies a woman’s monthly cycle. Most women experience some degree of pain and discomfort during that time of the month. But in the case of dysmenorrhea, the pain is classified as being severe and often debilitating.

A Korean study, in the International Journal of Nursing Studies, set out to determine whether acupressure could help alleviate some of the more acute effects of dysmenorrhea.

58 college-aged women participated in this experiment. Half of the women were subjected to a course of acupressure to a specific point, known as the “SP6 acupoint”. The other half were used as a “control” group, to help provide a comparison to the acupressure treatment group.

The treatment group received acupressure within 8 hours of menstruation. The researchers measured the symptoms relating to dysmenorrhea before the acupressure was applied, 30 minutes afterward and also at the 1, 2 and 3 hour mark – following the administration of acupressure.

The researchers found that there was a significant reduction in the severity of symptoms immediately after treatment. The effect appeared to last for up to 2 hours after the treatment ended.

As a result of these findings, the authors concluded that acupressure, “can be an effective non-invasive nursing intervention for alleviation of primary dysmenorrhea, with effects lasting 2h post treatment.”

One of the most common and unwelcome symptoms of pregnancy is “morning sickness”. In February of 2008, a study appeared in the journal Complementary Therapies in Clinical Practice that examined the role that acupressure can play in easing pregnancy related nausea and vomiting.

Before I discuss the specifics of the trial, I want to note that the researchers specifically recruited pregnant women who could not take conventional medications to treat their symptoms. During pregnancy many doctors and their patients try to avoid giving and taking medications if it’s not absolutely required.

In this study, a group of 26 women were asked to wear an “acupressure band” for 3 days. The (wrist)band applied pressure to the P(6) acupressure point – which is indicated for stomachaches, vomiting and a whole host of unrelated symptoms. A separate group of women also wore an acupressure wristband, but did not have therapeutic pressure applied to the P(6) point.

The group that wore the wristband (applying pressure to the P(6) point) found an improvement in the control and/or alleviation of “morning sickness” symptoms. 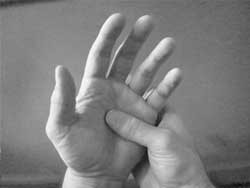 Catching Some Z’s with Acupuncture

If you go into a conventional doctor’s office and complain of sleeping problems, you’ll likely walk out with a prescription for a powerful sleeping pill, and that pill may or may not work for you. But what you can count on is the need to continue taking that pill  long term – unless you find a way to address the underlying cause of your sleeplessness. Acupressure may provide an alternative to sleep medications. A few recent studies provide evidence to support this mind/body option.

Two studies were released in December of 2008. The first one enrolled 25 volunteers with sleep disorders. All of the volunteers had the HT 7 acupressure point stimulated every night for two weeks. In this instance, a medical device was used instead of a practitioner’s fingers or a wristband.

60% of the volunteers (15 of the  25) experienced an improvement in sleep quality. As an interesting side note, 14 of the 25 volunteers were also suffering from cancer. In those participants, the rate of efficacy was even higher, at a 79% success rate.

A second study was published that same month to determine if stimulating the HT 7 acupressure point might have some effect on melatonin production. Melatonin is a hormone produced primarily by the pineal gland. The brain produces it to help control sleep and wake cycles. Melatonin is directly involved in our normal sleep patterns. Therefore, many people use supplemental melatonin to help promote a good night’s rest.

In this current study, 40 people with insomnia were split up into two groups. One group received pressure therapy on their HT 7 point, while the other group did not.This trial lasted a total of 20 nights.

Both groups were asked to complete medical questionnaires relating to their levels of anxiety and sleep quality. Urine samples were also collected to determine the amount of melatonin in their systems.

The authors of the study examined all the questionnaires and the biological samples and found that there was a reduction in anxiety and an improvement in sleep quality in those volunteers that received the acupressure treatment. There was another finding that may help to explain this result. The patients receiving acupressure had higher levels of melatonin. A greater number of the treatment group had what was considered “normal” melatonin levels. No safety issues were found with the use of the acupressure medical device.

Acupressure is a form of therapy that you can receive from a trained health professional, a commercial wrist band or a medical device. You can even apply it to yourself by using a self-help book.

It’s one of many natural options that, if effective for you, can allow you to avoid the use of certain medications and could conceivably improve the quality of your life.


5 Comments & Updates to “Acupressure for Health”