In natural medicine, there is often a tendency to apply research results in too broad a fashion. In today’s blog, I want to share some encouraging news about the link between nutrition and cancer. But in addition to that, I’d like to temper those positive findings with a bit of practical information as well. Stick around and you’ll see what I mean.

In the February issue of the American Journal of Clinical Nutrition, a study was presented that showed a protective effect of moderate soy intake with regard to colorectal cancer risk. Colorectal cancer is a cancer that affects either the colon or the rectum. It’s the fourth most common cancer among men and women. 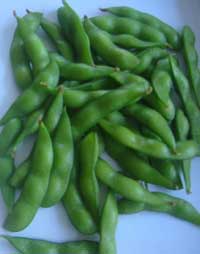 Over 68,000 women, with ages ranging from 40-70, participated in this 6 year study. All of these women were confirmed to be cancer free at the beginning of the trial. During the course of 5 years, the female volunteers were subjected to personal interviews and were asked to fill out “food frequency questionnaires”. Then, over one year of follow-up research was conducted.

The researchers carefully scrutinized the data and found some interesting links between cancer risk and soy consumption. Here’s what they found:

The types of soy products most often consumed were: tofu, fresh soy beans, soy bean sprouts and soy milk. These foods accounted for approximately 15% of the women’s fiber intake, 26% of their total calcium and 18% of their folic acid intake. These three nutrients are thought to support healthy tissue in the colon and rectum.

In conclusion, the authors state that, “This prospective study suggests that consumption of soy foods may reduce the risk of colorectal cancer in postmenopausal women.”

Notice how specific the conclusion is. After fully analyzing the data, the researchers only felt confident saying that a risk reduction is likely in postmenopausal women. This is very important to note because the same may not be true for younger women at risk. It’s also unlikely that soy consumption will offer the same results for men. In fact, a study from a few years ago found no protective effect of dietary soy for a large group of Japanese men. In that study, the men actually consumed more soy than the women. But, with regard to colorectal cancer, only the women derived protection.

If we generalize findings too broadly, it’s a disservice to those that are looking for reliable information that may actually apply to them – as individuals. So to say that, “Soy Prevents Colorectal Cancer” is not helpful to a great many health consumers. But it happens all too often. That’s why I want to encourage you to always read the fine print and ask lots of questions. The answers you find may not be the answers you’d like to hear, but they’ll likely provide much more accurate and reliable information upon which you can make responsible decisions.