A Natural Remedy for Sleep Apnea

We all know what it feels like to have a restless nights sleep. The next day we feel like we’re dragging. Our mood is lousy. We can’t think straight. It’s something we all hope to avoid. But there are many people out there that go through this process on nightly basis. One of the most common reasons for this type of destructive pattern is a condition called Obstructive Sleep Apnea (OSA).

Catching Your Breath Instead of Z’s

OSA refers to a partial blockage of our airway that affects how well you breathe while sleeping. In OSA, the body tries to breathe normally, but cannot do so because of a physical obstruction. This leads to a lack of oxygen and very poor sleep quality.

The ironic thing about OSA is that many sufferers aren’t even aware of it. They simply believe they’re part of the unlucky group that just doesn’t sleep well (for undefined reasons). It is often the partners of OSA sufferers who first detect the problem. Loud snoring, tossing and turning at night, gasping for air and long periods between breaths (during sleep) are the most frequent tip offs. 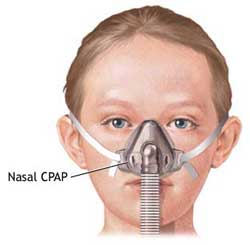 To treat this common health concern, conventional doctors often recommend medical devices such as a Continuous Positive Airway Pressure (CPAP). This is a device that sends pressurized air through a mask that is usually worn over the nose. The stream of continuous air helps to keep the airway open, which generally allows for a major reduction in OSA symptoms and improved sleep quality. The downside, of course, is that most people would rather not wear headgear while sleeping at night. The other thing to consider is that OSA can be a chronic condition and would likely necessitate long term use (perhaps for one’s lifetime) of such a device.

There are other conventional options such as dental devises that adjust the position of jaw to help open the air passage behind the tongue. In severe cases that are unresponsive to other treatment, surgical interventions are also available.

Another viable option was presented in this month’s edition of the American Journal of Respiratory and Critical Care Medicine. The goal of the study was to scientifically assess whether a weight loss program could help improve OSA symptoms in a group of overweight patients.

To test this hypothesis, 72 obese volunteers were enrolled in a controlled experiment. Half of the patients with mild OSA agreed to follow a very low calorie diet for one year. The other half did not adopt a specific diet. Both groups received “lifestyle counseling” in addition to their respective diets.

All of the patients were subjected to a test that quantified their OSA symptoms and another test to help determine their overall quality of life. The quality of life testing is relevant here because of the impact that interrupted sleep can have on our subjective well being.

After the year long study was complete, the researchers analyzed the data and made certain determinations. Here are the key findings that they presented:

It’s apparent from these test results that the greater the weight loss, the more significant the improvement in sleep quality.

The authors of the study commented that, “lifestyle intervention with early weight reduction is a feasible, low-cost, and curative treatment for the vast majority of patients with mild OSA. The treatment also results in an improvement of other obesity-related risk factors for cardiovascular diseases.”

While this study emphasized diet over exercise, another study conducted in Japan found that aerobic exercise could also help improve another form of sleep apnea. Since exercise often promotes weight loss, it’s a good bet that combining a healthy diet and exercise may further improve the likelihood of symptomatic benefits in those with OSA.

On a personal note, I’d like to share my own testimonial relating to this matter. I was an OSA sufferer myself. And recently I lost approximately 50 lbs. I was also one of the lucky ones because my doctor suggested that I lose weight as a first-line treatment for this condition. And it’s working. My sleep quality is definitely improving. Maybe this approach will help some of you too.


6 Comments & Updates to “A Natural Remedy for Sleep Apnea”