Are sweet potatoes really healthier than regular, “white” potatoes? In a word: yes. For starters, the most obvious difference between the two relatives is the vibrant orange color of the so-called “sweet” variety. Carotenoids, much like those found in carrots, are naturally occurring pigments which impart this easily identifiable characteristic of sweet potatoes. Apart from their well established antioxidant properties, select carotenoids, such as beta carotene are used by the body in the manufacture of Vitamin A, an essential nutrient. But, that’s not all that sets sweet potatoes apart from paler potatoes. Sweet potatoes are also higher in fiber and Vitamin C, and equivalent in most other nutrients including potassium. However, before you feel too good about ordering a side of sweet potato fries, you should also be aware that they’re not all they’re cracked up to be – especially for diabetics. 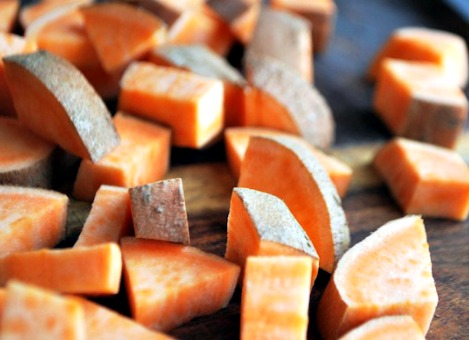 There is a fair amount of confusion about the relative health benefits of sweet potatoes. In reality, they’re a mixed bag of both harmful and healthful properties. When eaten in moderation, sparingly and in the context of an otherwise healthy, low-glycemic meal, they can contribute valuable antioxidant protection and nutrition. Apart from the aforementioned carotenoids and Vitamin C, sweet potatoes also possess protective phytochemicals, such as chlorogenic acid. What’s more, in some countries where malnutrition is common, incorporating sweet potatoes into the daily diet is effective as insurance against Vitamin A deficiency. Arguing against the judicious use of sweet potato in either circumstance seems foolhardy. Having said that, the way that sweet potatoes are often promoted nowadays often veers too far in the opposite direction.

Numerous doctors and nutritionists endorse the inclusion of sweet potatoes in menu plans intended for diabetics and healthy individuals alike. I generally disagree with this position for two primary reasons. Firstly, sweet potatoes are loaded with fructose – a form of sugar which has been associated with a variety of health concerns ranging from fatty liver disease to high blood pressure. In addition, the positive studies published in relation to sweet potatoes and blood sugar control have mostly been conducted using a specific extract of a South American sweet potato known as Caiapo (Ipomoea batatas). To be clear, this isn’t the type of sweet potato most people traditionally consume. Also, the dosage used in the published studies (4 grams of a proprietary extract) is near impossible to equate to the amount of sweet potato eaten as a food source. This leads me to believe that many of the assertions made about the health benefits of conventional sweet potatoes are based on evidence derived from studies using Caiapo. Incidentally, at the moment, Caiapo extracts are relatively difficult to acquire and are exclusively produced by Fuji-Sangyo, a Japanese nutraceutical manufacturer.

If you enjoy sweet potatoes and want to derive the greatest possible benefit from them, here’s what I suggest you do. Data from at least two studies indicates that boiling sweet potatoes results in the lowest glycemic index – nearly half that of baking or roasting. It’s also important to note that boiling sweet potatoes actually increases their total antioxidant capacity. Leaving the skin on sweet potatoes and adding a good source of fat (grass fed butter, unrefined olive oil, etc.) will also assist in moderating their glycemic index and load, while simultaneously enhancing the absorption of the carotenoids present in the orange flesh. Finally, eating a relatively small quantity of sweet potato is fine for almost everyone. For instance, a small sweet potato (60 grams or 2 oz) contains only 10 grams of non-fiber carbohydrates and a trivial glycemic load of 5. In this case, employing moderation truly does help to transform a potentially harmful food into a reasonably healthy option. 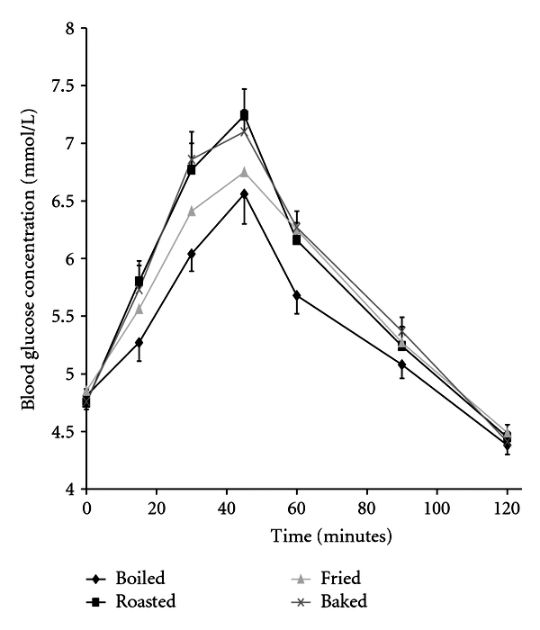