One of the downsides of reporting on natural health and nutrition is that you sometimes have to share bad news. Today is one of those days. I have some rather bleak news about one of the world’s most popular snacks. But, I’ll temper that information with some really good news about an exotic fruit that hopefully will become more popular very soon.

“Lays” Off the Potato Chips

Have you ever heard of a chemical called acrylamide? It’s a substance that forms when certain types of cooking methods are employed: high-temperature baking, frying and roasting. Water based cooking methods such as boiling and steaming do not contribute to the acrylamide content of food.

Not all foods form acrylamide when cooked at high temperatures. Generally speaking, vegetables and grains are most vulnerable. Dairy, fish, meat and poultry are typically not considered a major source of this substance.

So why am I telling you about this? In recent years, red flags have popped up with regard to acrylamide consumption and cancer risk. Now, a new study published in the American Journal of Clinical Nutrition points to a new area of concern: heart disease.

In this breaking research, 14 healthy participants ate about 5-6 oz of potato chips a day for 4 weeks. The volunteers were comprised of 8 females and 6 males, with an average age of 35. Blood tests were conducted at the start and end of the trial. Here’s what they showed:

The authors of the study chose to summarize their research as follows: “These novel findings seem to indicate that chronic ingestion of acrylamide-containing products induces a proinflammatory state, a risk factor for progression of atherosclerosis.”

Kiwis to the Rescue

So that’s the bad news. The good news is that there appears to be a heart-salvaging fruit that’s as close as your neighborhood market. In fact, many of the benefits presented in the following studies may one day allow for kiwis to provide the same benefits we normally associate only with medications.

New evidence from the Institute of Nutrition and Health Science in Taiwan showcases a new reason to eat kiwis on a regular basis. A study was just conducted that included 12 men and 30 women. They all were classified as having “high cholesterol”. For 8 weeks, they were all asked to eat 2 kiwis per day.

When the researchers compared blood tests from the beginning of the study to the end of the study they found several beneficial changes in the men and women:

I wish the researchers would have also checked for any changes in blood pressure. Kiwis are a fantastic source of natural potassium. Optimizing potassium intake can help to manage hypertension (high blood pressure). 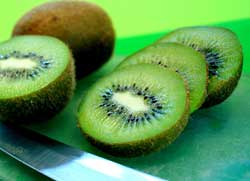 The results of the 2009 Taiwanese study are supported by a 2004 study from Norway. In that trial, it was found that regular consumption of kiwis could also help to improve other measures of cardiovascular health. Specifically, 2-3 kiwis a day lowered triglyceride levels by 15% and reduced platelet aggregation by 18%. Platelet aggregation is a measure of the “stickiness” of blood. Keeping it in check promotes healthy circulation. Aspirin therapy is the most commonly used inhibitor of platelet aggregation. But aspirin carries with it some possible side effects. Kiwis, on the other hand, provide quite a few “side benefits”.

I know what many of you are probably thinking. Kiwis just aren’t quite the same as potato chips! I get it. For the time being, I can’t offer you much consolation there. However, in the future, manufacturers may find ways to minimize the acrylamide levels in processed foods. This could make them a bit less damaging. But even if that day comes, they’ll still never be able to compare to the goodness that only nature can provide.