One of the greatest joys for a cinephile is being introduced to a piece of history that you never knew existed. Bottle Shock provided me with my most recent pleasure of this kind.

The film is based on the true story of the first “blind” wine competition between the reigning champions (the French) and the scrappy newcomers from Napa Valley (in northern California).

There are several key players in Bottle Shock. In France, there’s a struggling British wine shop owner who’s desperate to find meaning, respect and possibly even a profit for once. He’s played by the always enjoyable Alan Rickman. 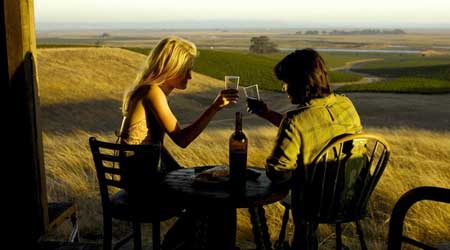 In Napa, we’re introduced to an ultra-serious wine maker (Bill Pullman), who’s in a do-or-die situation at his vineyard. The money’s run out and his perfectionist leanings are weighing him down like an oak barrel. Adding to his problems is his beach bum son who shows glimpses of great promise, but is still stuck in a “Woodstock” kind of mentality.

Also in California is a vineyard worker named Gustavo (Freddy Rodriguez). His character takes each breath for the chance to create something memorable from his beloved vines. But passion and expertise don’t always ensure opportunity. At a pivotal point in the film, his character rages, “You have to have it in your blood. You have to grow up with the soil underneath your nails, the smell of the grapes in the air that you breathe. The cultivation of the vine is an art form. The refinement of the vine is a religion that requires pain and desire and sacrifice”.

Finally, this nearly all-male world is brightened up by an enthusiastic, but pushy, intern named Sam (Rachael Taylor). She interjects herself into the lives of everyone she meets. No plans are ever necessary. She “knows” everything will somehow work out, even though all signs point to the contrary. When we first meet Sam, her car is sporting a flat tire. It’s not a problem though. She believes that cars really only need three tires to get you where you need to go.

If you’re unfamiliar with the Napa Valley, you might not know what a gorgeous land it is. It’s lush and a rare combination of rolling hills and sea side majesty. This film takes every opportunity to showcase this unique part of the world to it’s fullest. In that respect, it is a character onto itself.

I wanted to love this film. For starters, I enjoy wine very much. My wife and I have been to Napa Valley and think the world of it. Beyond that, one of my favorite films in recent years also takes place in this same region – Sideways. But sadly, I knew within the first five minutes that Bottle Shock wasn’t going to be all that I had hoped for. Why? Because the film is way too heavy handed, in all the wrong places – from the script to the cinematography to the performances. It just didn’t feel like the filmmakers were confident enough in the material. Maybe because of that, it gave me the impression that things seemed forced or unnatural.

If you’re a wine aficionado or just want a light introduction to the wine making process and Napa Valley, I wouldn’t dissuade you from seeing this film. Or maybe you’re looking for an uplifting film with a few laughs and some historical significance. If that fits the bill for you, you may enjoy this film more than I did.

Bottle Shock is rated PG-13 for some strong language and mild sexual situations. It’s currently available on DVD. If you have the chance to see it, please drop me a line and let me know what you think about it.