Almost everyone is familiar with the term heartburn, which is also known as GERD (Gastro Esophageal Reflux Disease). When GERD is left untreated it can create other problems. One possible health consequence of GERD is a condition called Barrett’s Esophagus (BE). Barrett’s Esophagus comes into the picture when acid reflux continually makes contact with the lining of the esophagus. This can be problematic because people with Barrett’s Esophagus are 30 to 40 times more likely to develop esophageal cancer than the average population.

BE is particularly dangerous because it generally doesn’t present obvious symptoms. It is most often detected by accident when investigating other conditions that require endoscopic testing, such as trying to locate an ulcer. While the detection of BE is often elusive, it is estimated to affect about 5% of the general population. 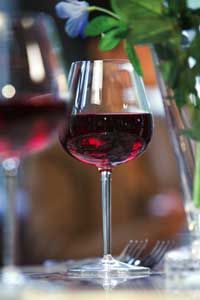 Several recent studies provide hope in the area of BE prevention. In the March edition of the journal Gastroenterology, consuming wine was shown to reduce the risk of Barrett’s Esophagus by 56%. Here are some specifics of the study:

These results were somewhat surprising because alcohol is typically thought of as an irritant. In the case of BE, the cells in the esophageal lining are already irritated. The theory is that naturally occurring antioxidants in wine may account for the preventive effect.

The lead researcher of the study, Dr. Douglas A. Corley, summarized his views in the following manner, “My advice to people trying to prevent Barrett’s Esophagus is: keep a normal body weight and follow a diet high in antioxidants and high in fruits and vegetables.” He went on to add that, “We already knew that red wine was good for the heart, so perhaps here is another added benefit of a healthy lifestyle and a single glass of wine a day.”

Another just published study found that wine appeared to reduce the risk of not only Barrett’s Esophagus, but also reflux esophagitis (a lesser inflammation of the esophagus) and esophageal adenocarcinoma (cancer). 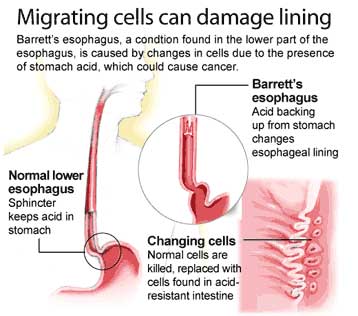 But what if you don’t drink alcohol? Are there other steps that can be taken to reduce the likelihood of esophagus problems? There certainly are. In addition to maintaining a healthy weight, modern science has also noted a protective effect for certain common dietary options. Here are a few of the best choices:

If you suffer from chronic heartburn or if you’re overweight with a family history of esophageal cancer, please ask your doctor about your risk of Barrett’s Esophagus. As you can see, there are safe and natural steps you can take to shift the odds in your favor – both with regard to prevention, and possibly even improvement of existing inflammation.