If you flip through the advertisement sections in your local newspaper or favorite magazine, you’ll probably see multiple ads for skin care creams and lotions. You might even see some promotions for anti-aging dermatologists and skin care spas. But when’s the last time you’ve seen an ad promoting the value of nourishing your skin from the inside out? In today’s blog, I want to share some tips that may help you improve the quality of your skin and reduce the number of products that you “need” to put on it. 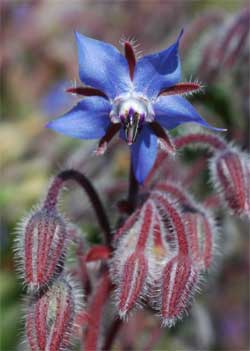 When it comes to skin care, there’s one major misconception that I hope I can dispel: Eating fat does not make your skin oily or damage your skin in any way. That’s 100% untrue, provided that you choose to eat healthy fats. In fact, there are certain fats that are especially good for your skin. Here are a few studies that highlight several excellent oils that support the appearance and feel of your skin:

A study published in the March 2009 issue of the British Journal of Nutrition reports that both flax and borage oil can improve several key characteristics of skin quality in women. Over the course of 12 weeks, three groups of women consumed either a) flaxseed oil; b) borage oil or c) a placebo. Both during and after the trial, several skin tests were conducted. The results of the testing revealed the following information:

Borage oil and evening primrose oil are often used interchangeably. They both contain a rare fatty acid called Gamma-Linolenic Acid (GLA). Modern research indicates that GLA possesses natural anti-inflammatory properties. Many skin conditions ranging from acne to dermatitis to eczema to psoriasis all have one thing in common: inflammation.

This next study examined the effects of evening primrose oil (EPO) on a condition called atopic dermatitis (AD). AD is generally characterized by a dry, irritated and itchy rash. It very commonly affects babies and children, but isn’t unheard of in adults.

This particular trial took place at the Department of Dermatology in Kolkata, India. For this experiment, a group of AD sufferers were given one of two treatments. Evening primrose oil supplements were provided to half of the AD patients. The remainder were supplied with sunflower oil supplements. The duration of the study was 5 months.

In total, 96% of the patients taking the EPO showed significant reductions in the intensity of their AD symptoms. Only 32% of the sunflower oil users claimed any benefit at all. No adverse effects were reported in either group.

Fish oil and flaxseed oil are both good sources of omega-3 fatty acids. These oils are often recommended by doctors to support the cardiovascular system, a healthy mood and they’re even given to pregnant mothers for the benefit of developing embryos.

This final experiment supports the earlier findings I shared about flaxseed oil. In this trial, a purified fish oil supplement was tested to see if it could help improve skin elasticity in women.

24 healthy, middle-aged women participated in this study. For 3 months they were asked to take fish oil on a daily basis, after which a special dermatological assessment was made using a device called an “optical cutometer”. It was found that there was a 10% increase in skin elasticity by the end of the trial.

A dry, irritated complexion leads to hastened aging of the skin. It’s uncomfortable and it doesn’t look good either. But as you can see, there are things that we can do to address this annoyance. By adding more healthful fats to your diet, you’re literally prompting your body to display its inner health on the the outside. You’ll feel better, you’ll look better and it’ll cost you a lot less than most of the skin care “miracle” products out there.