I often see advice given by nutritionists and other medical experts recommending that you start the day with a healthy breakfast. Since blueberries are known to be one of the most beneficial of all fruits, a blueberry smoothie or yogurt topped with these berries are common suggestions. The trouble with this advice is that it may very well be counterproductive.

New research published in the journal Free Radical Biology and Medicine indicates that combining blueberries with milk severely negates the antioxidant effects of this powerhouse fruit. Here’s an overview of how this determination was made: 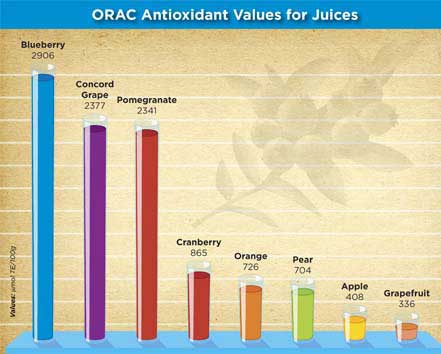 The surprises don’t stop there. Another common misconception about blueberries (and fruits in general) is that the cooking process diminishes antioxidant and nutrient content. In certain instances that is true. But according to a recent study conducted at James Madison University, baking, microwaving, pan frying and simmering wild blueberries does not negatively affect their antioxidant potential. In fact, pan fried blueberries exhibited higher antioxidant capacity than thawed (uncooked) blueberries! This observation is not unheard of. Tomatoes cooked with some form of fat offer greater absorption of antioxidants, such as lycopene, than raw tomatoes.

If you’ve been told that organic blueberries are better for you than their conventionally grown counterparts, then you’ve been well informed.

Now that you have a more scientific foundation about how to use blueberries, I’d like to suggest a few natural options that sidestep the “blueberry blockers”.

Instead of using cow’s milk in your protein shake/smoothie, use coconut milk. You may also want to avoid any milk derived protein (casein and whey). Alternatives to milk based proteins include: brown rice protein, egg protein, golden pea protein and hemp protein.

If you like hot cereal in the morning, then you may want to consider this low carb, hot almond blueberry pudding.

Even a piping hot, organic blueberry pie would be great! But try to use stevia instead of sugar and a nut based crust instead of a hydrogenated fat filled frozen pie crust from your local market.

Blueberries are truly one of nature’s super foods. I hope you’ll use some of this information to help yourself and others derive the greatest possible benefit from them.