Mangosteen for Eczema and Psoriasis

Part of the reason I started this blog was to share observations that I’ve stumbled across in my personal life. In general I’ve been pretty fortunate in enjoying relative good health. But I’ve had my share of medical bumps along the road just like anyone else. One such event occurred last year when I had a rather severe inflammatory skin condition (a supposed combination of eczema and psoriasis). I went to see both conventional and holistic doctors and really wasn’t satisfied with the treatment plans that either of them laid out for me.

The dermatologist I visited suggested doing a course of prescription oral steroids. The holistic doctor recommended that I adopt a pretty radical diet and detoxification routine. He even mentioned that I might have to visit the Dead Sea in Israel to benefit from climatotherapy! Not what I had in mind!

Since I wasn’t receptive to either of these treatment protocols, I decided to experiment on myself instead. To that end, I recalled having encountered anecdotal reports about an extract from a tropical fruit called mangosteen, which aids with various skin conditions. This led me to scouring the PubMed scientific archives. 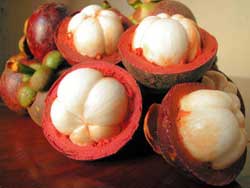 During my personal research expedition, I discovered that there had been over 30 years worth of scientific papers published about the possible health effects of mangosteen. I was actually quite surprised, because mangosteen had only recently become a popular fixture in the natural health marketplace. From an outsiders point of view, it appeared that it had all the earmarks of a faddish newcomer.

As I delved more deeply into the specific science, I noticed that there were, in fact, quite a few studies that suggest a very real application for mangosteen in the management of skin disorders. It appears as if the “queen of fruit” possesses anti-acne (1,2), anti-inflammatory (1,2) and UV radiation protecting properties.

In addition to its potential skin supporting role, I also found preliminary evidence that this obscure fruit may very well afford protection in other areas of health maintenance such as:

These experimental findings add to the long list of uses that have been traditionally associated with the tropical fruit. In countries such as Cambodia, China, Indonesia, Malaysia, Singapore and Thailand mangosteen has historically been utilized for health concerns such as dysentery, infected wounds and ulcers. These benefits appear to be due to a specific class of phytochemicals (plant chemicals) found in the purple rind of this fascinating fruit. These substances are collectively known as xanthones and they are not found in high concentrations in more commonly consumed fruits and vegetables outside of southeastern Asia. 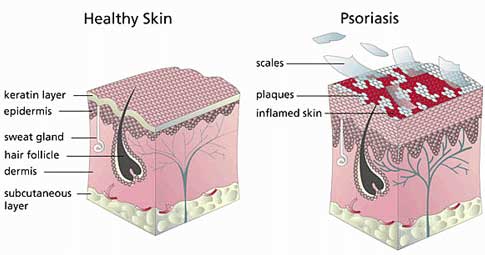 But let’s get back to my story. I was in a lot of discomfort. My rash was very dry and painful. It had taken hold over large portions of my arms, legs, face and neck, and was clearly visible to anyone who saw me. It hurt to move around too much and, quite frankly, I felt self-conscious about how I appeared in this state.

My holistic doctor expected me to follow his strict dietary and supplement recommendations. My dermatologist expected me to take her prescribed medicines. I was to follow their advice and then report back in two weeks. But instead, I did my best to clean up my diet and added a mangosteen extract to my daily routine.

Two weeks went by and I returned for my follow up doctor appointments. When they saw me they were visibly pleased with the results of their respective treatments. Then I told them that I didn’t follow their recommendations. The look of shock was priceless. My skin was nearly 100% healed. I felt better. I looked better. My dermatologist chalked it up to an unusual remission. She suspected that my skin troubles might be the type that come and go. My holistic doctor was more curious about my homegrown treatment program. He did ask to what I attributed my recovery, so I explained it to him.

I can’t tell you for sure that it was mangosteen that allowed me regain my wellness. I just know that I was in really bad shape and I wasn’t expected to get well anytime soon. Except that I did. Could the research I found on mangosteen explain my experience? It’s possible, but there’s no way for me to prove it. My only tangible evidence is healthier skin.


48 Comments & Updates to “Mangosteen for Eczema and Psoriasis”