According to the US National Cancer Institute, it is estimated that more than 186,000 men will be diagnosed with prostate cancer (PC) this year alone. As many as 29,000 of those very same men will lose their lives because of this dreaded affliction that occurs almost exclusively in men over the age of 45.

Modern science is working feverishly to come up with new and innovative ways to treat this deadly disease without causing serious side effects for those who survive the battle. But until the day comes when such treatment is effective, safe and widely available we should continue to simultaneously focus our efforts on preventing PC in the first place.

According to new research published in the journal Nutrition and Cancer, white button mushrooms may aid men in combating prostate cancer. The scientists who made this discovery also recently found that the same fungi mitigate the spread of breast cancer cells. Since both of these cancers are hormonally driven, such an association is not without some basis. 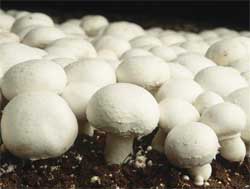 Another reason why white button mushrooms were tested is because they’re widely available, edible and they contain a relatively rare fatty acid called conjugated linoleic acid (CLA). CLA has been shown to possess cancer fighting properties when it’s derived from other sources – usually safflower or sunflower oil.

In this study, an extract of white button mushrooms was tested in a laboratory setting against prostate cancer cells and in mice that were injected with PC.

Both types of PC cells were dramatically reduced when combined with the mushroom extracts. It was found that the larger dosage of mushroom extract provoked a greater amount of cancer cell death. This tells us that the white buttons work in a dose-dependent manner.

The mice with prostate cancer showed a similar reaction. Two groups of mice with PC were either given the white button extract or were left untreated. Those receiving the mushrooms exhibited a 68% reduction in tumor size. Further analysis revealed that the extract slowed the spread of the cancer cells and instigated a process called apoptosis, a process whereby specific cells (cancer cells in this instance) are selectively wiped out.

Shiuan Chen, the lead researcher in the study explained his take on these findings. “I think mushrooms, and especially medicinal mushrooms, are being used to prevent cancer because they potentially have the ability to affect immune function in our bodies.”

Dr. Chen, a professor at the Beckman Research Institute at the City of Hope, also relayed hopeful news with regard to human-based studies. He mentioned that trials are currently underway (at the City of Hope) with prostate cancer patients who haven’t responded to more conventional treatments, such as hormone therapy and surgery.

That’s not the only good news about mushrooms and prostate health. Two other recent experiments found promising results with regard to relieving the symptoms of prostate enlargement and in the use of integrative medicine against PC.

Research recently presented in Japan has discovered that a type of mushroom called reishi can help reduce urinary issues relating to an enlarged prostate. In that study, a group of middle-aged men with “lower urinary tract symptoms” found a modest improvement in the overall urinary prostate symptoms while taking a reishi extract.

A combination of immunotherapy (to support the immune system) and an extract of the maitake mushroom demonstrated a powerful reduction (65%) in PC cell growth. The authors of the study noted a synergistic effect when the two treatments were combined. The combination of the two was more powerful than either one used on its own.

It’s not difficult to incorporate medicinal mushrooms into our daily menus. Here’s one example of a healthful side dish that may help keep breasts and prostates in tip top shape.

According to many mycologists (mushroom experts) brewing mushrooms in a tea form or including them in broths and soups may be the best way to derive the maximum benefit from them. There is a tough substance in mushrooms called chitin, which appears to trap many of the medicinal components held within the fungi. Brewing or simmering the mushrooms allows for the release of the therapeutic components into soups or teas.

The potential of mushrooms in the field of cancer research certainly looks promising. But we can look beyond that and consider the possible role that they may play in supporting our immune systems in far less threatening situations, such as averting the common cold or seasonal flus. The upside is that mushrooms can be easily and tastefully incorporated into the busiest of lifestyles. All it takes is ordering a mushroom side dish the next time you go out for dinner or brewing a cup of green tea with added mushrooms in the pot.


9 Comments & Updates to “Mushrooms and Cancer”