As you’ve probably gathered I’m a big supporter of the natural health industry. On the whole I believe they promote a healthier society by providing alternative options for an increasingly toxic world. However on occasion I need to point out areas in which I disagree with certain prevailing notions within the industry. Today I’m going to discuss one disturbing trend with regard to the promotion of a natural sweetener called agave nectar (or syrup). 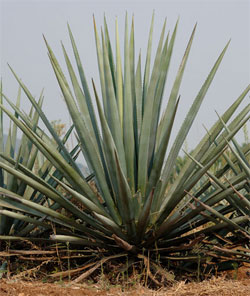 Most people are familiar with agave when it takes the form of tequila. But over the past few years, this succulent plant has been used to manufacture a “healthy” sweetener. There are several reasons why it has been designated as such: 1) It’s often grown organically, 2) It ranks lower on the glycemic index than many other sweeteners – which possibly means a lesser impact on blood sugar levels, 3) It’s an exotic and novel ingredient.

So what’s so harmful about an exotic, organically grown plant that has a milder effect on blood sugar levels? I can answer that question in one word: fructose. Fructose is a simple sugar found in many fruits and vegetables. It’s also one of the most controversial ingredients currently found in the food supply – when it’s used as a concentrated sweetener.

Perhaps you’ve heard of a food additive called high-fructose corn syrup (HFCS). This is a sweetening agent that is found in many pre-packaged and refined foods. Scientific research has linked HFCS to a number of health consequences, such as: diabetes, high triglycerides, metabolic syndrome and even gout. HFCS is now generally considered the worst offender in the realm of sweeteners. Its has reached the status that trans-fats (hydrogenated fats) have obtained in the world of dietary fat sources.

As bad as HFCS is, it doesn’t hold a candle to agave syrup. The following nutritional analysis will help to explain why:

In addition to those disturbing facts, there is also another issue worth considering. Does agave possess any other properties that would somehow make it worth using? One recent experiment analyzed the relative quantities of antioxidants in several sugar alternatives. The following findings were published in the January 2009 edition of the Journal of American Dietetic Association:

This matters in the real world because scientific evidence is telling us that high fructose consumption may play a significant role in the current diabetic and obesity epidemics. A reminder was just published in the March issue of the journal Biochemical and Biophysical Research Communications. Researchers from The Johns Hopkins University School of Medicine examined 9 years of laboratory work relating to the role that fructose plays on the brain.

In essence, what they found was that fructose stimulates the desire to eat more. Glucose, another common form of sugar, did not show the same effect. This finding provoked the following response from M. Daniel Lane, one the scientists involved in this study, “We feel that these findings may have particular relevance to the massive increase in the use of high fructose sweeteners (both high fructose corn syrup and table sugar) in virtually all sweetened foods, most notably soft drinks. The per capita consumption of these sweeteners in the USA is about 145 lbs/year and is probably much higher in teenagers/youth that have a high level of consumption of soft drinks.”

The moral of the story? We should never simply accept that something is healthful just because it’s natural. Ultimately, we’re the guardians of what goes into and stays out of our bodies. Being as informed as possible will help us avoid missteps like the one promoted by (otherwise good) manufacturers that use agave in their products. We can even take this one step further and contact said manufacturers and express concern about this trend. This may help to hasten the shift from unhealthy sugar substitutes, such as agave syrup.

Personally, I don’t use a lot of sweeteners in my diet. But when I choose to, I opt for pure stevia. There’s a great deal of scientific and traditional evidence to support its safety. The commercial availability and ease of use for stevia products will improve in the coming months and years. It’s popularity is growing and the restrictions on its sale are also relaxing. I think stevia is a step in the right direction for anyone who is looking for the safest sweetening option out there.