I’ll admit up front that I’m not a World War II aficionado. But even so, when I first sat down to watch the film Defiance, I really wondered what new things could possibly be said about this well worn period of history. I mean how many films, TV programs and mini-series can be dedicated to one war before things start to become redundant? I don’t know the answer, but I do know that when I screened Defiance I did indeed learn something new and experience the Second World War in a different way than I had before. 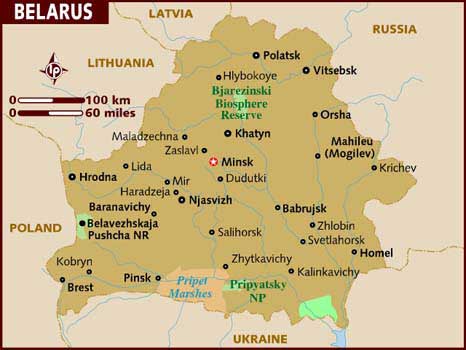 The film is mostly set in the Lipicza’nska Forest in Belarus (see map) during the early years of WWII. It tells the true life story of three Jewish brothers, played by Daniel Craig (the new James Bond), Liev Schreiber (The Omen remake) and Jamie Bell (King Kong) who retreat to the deep forests to escape capture from a growing Nazi presence. But instead of hiding, they decide to fight those who want to exterminate them. Before long, other Jewish refugees find their way to joining the struggle for survival and their community grows.

In the forest a new world evolves – one that seeks revenge against the enemy, searches for meaning among the madness that surrounds them, but yet is doggedly determined to remain human in the most horrific of situations. The eldest of the brothers assumes the role of leader in this unconventional militia where both men and women must contribute to their own private war. Such extreme circumstances prove to be a great equalizer. Farmers and intellectuals must fight hand in hand. Fathers and daughters take up arms together. Power can only be achieved by strengthening  the community as a whole.

At this point you might think that the good and bad guys are clearly defined. This is true to some extent. But director Edward Zwick (Blood Diamond, Glory, The Last Samurai) respects the truth about humanity enough to allow for evil to lurk in all corners of the human soul. We see the horror that war brings and how it shapes the lives and actions of everyone it touches. For some it draws out a heroism that is hard to fathom. In others, it breeds a darkness that may never have emerged had it not been for what they had witnessed and had to endure.

The really interesting thing about Defiance is that it turns convention on its head. It’s a film filled with the ghosts of the Holocaust, but chooses to point its lens in directions that prior films have not. Describing this type of subject matter as “thrilling” and “action packed” would normally seem inappropriate and downright disrespectful. But somehow Defiance manages to purposefully stir our emotions, while inspiring and thrilling us by shining a light on a time and place that truly deserves to be remembered.

It wouldn’t surprise me if one day this film is used as a teaching tool in high school history classes. Stories such as these are important because, sadly,  they’ll be applicable throughout the course of human history. There will always be some who choose to act in unspeakably evil ways. The question is how “we” will respond in turn.

I highly recommend Defiance not only for the importance of its subject matter, but also because it’s a successful piece of entertainment. It’s empowering to both men and women alike, and could instigate some very constructive discussions between parents and their children as well. It does carry an R Rating for some graphic violence and several instances of profanity. But I’d hate for that rating to dissuade older children and teenagers from being able to see it.

Defiance will be released on DVD in June of 2009. If you decide to check it out, please let me know what you think about it.