The Truth About Black Currants

If you visit health food stores on a regular basis you’ve probably begun to see products that feature black currant juices and extracts. It’s important to clarify that black currant seed oil is not the same as black currant extract or juice. The oil has been commercially available for many years and is known for containing a therapeutic fatty acid called GLA. But it’s the juice and concentrated extracts from the berry that are now being widely promoted throughout the natural health industry. They’re but one contender for the “hot new product of the moment” award. 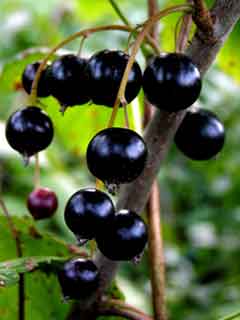 I’d like to attempt to separate some of the facts from the promotional material associated with these berries. In order to do so, let’s look at some scientific research that will help us to view black currants from a reasonable perspective.

Black currants are similar in many ways to other black, blue and dark purple berries. I’m specifically referring to members of the berry family that includes black raspberries, blueberries and elderberries. But just like human family members, there are some distinct and subtle differences to be found in each of these relatives.

From a nutritional standpoint black currants are an excellent source of vitamin C and potassium. But the primary selling point for almost all berries is their phytochemical (plant chemical) antioxidant content. These chemicals are largely responsible for the rich, dark skin color of many of the berries. That’s also thought to be the primary reason for their health promoting properties.

Here’s what we currently know about the possible health benefits of this up-and-coming berry:

In order for any food or supplement to provide health benefits, it must be able to be absorbed in therapeutic quantities. To that end, I want to mention two potentially vital pieces of information about enhancing the body’s uptake of the phytochemicals in black currants. 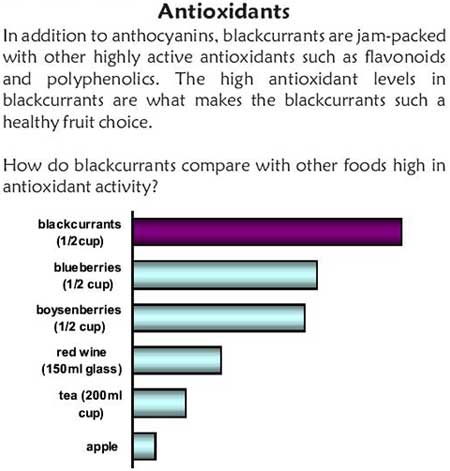 In addition to the more common uses of black currants, I also came across some promising, but highly preliminary findings about possible future uses.

In a previous article about blueberries, I pointed out a scientific inquiry that found that organic blueberries had higher levels of antioxidants than those that were conventionally grown. The same does not appear to hold true in the case of black currants. This is not to say that there aren’t other reasons to look for organic currants. But if you can’t find them, at least you can rest assured that you’ll benefit fully from any kind of black currant you can find.

After reviewing the existing literature on black currants, my personal position is to “wait and see”. In my opinion, eating a wide variety of berries and utilizing berry extracts can be enormously beneficial to a great many people. But I’m not yet sold on the superiority of black currants vs other similar berries. For instance, the science supporting the use of blueberries is much more substantial at this point.

So the next time I see a salesman at my local health food store offering a free “shot” of black currant juice, I’ll try it. But when he asks me if I’d like to buy a bottle, I’ll probably just say, “Check back with me in 2 or 3 years”.


14 Comments & Updates to “The Truth About Black Currants”