In the opening scene of Seven Pounds we catch an unsettling glimpse of the popular actor Will Smith speaking words that are most unexpected. He’s in a dark motel room talking to someone on the phone. “There’s been a suicide”, Smith says. The 911 operator on the other end of the line replies, “Who’s the victim?”. The chilling reply – “I am”.

It’s immediately apparent that the entire film will be a puzzle and it’s up to us to piece it together. It’s a calculated risk by the filmmakers and one heck of an interesting task for the viewer. In order for such a device to work, we need to genuinely feel the suspense of the circumstances and be compelled by the characters involved. 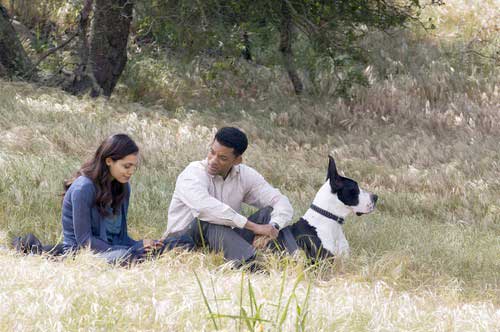 The character Will Smith plays is an odd cat. He’s an IRS agent who shows an unnerving interest in the lives of the people whose cases he’s handling. Rather than refer to facts and figures in their files, he prefers to visit and observe their lives in person. His interest is not so much in the truth of their tax returns or their ability to pay any money owed, but rather in the content of their being. He wants to know if they’re “good people”.

During the course of his work we’re also given minute glimpses of some sort of traumatic event that haunts this IRS agents soul. We don’t know exactly what happened and what role he may have played in it. Again we’re left to wonder and go along on this enigmatic ride. In fact, for the majority of the film, the more we learn the more we’re left wondering. That’s a rare attribute for any film much less a Hollywood blockbuster such as this.

This film was knocked around quite a bit when it was released during the holiday season in December of 2008. It didn’t do very well critically or financially. I think that’s a shame, because this is a film that really strives for lofty goals. It’s got a huge heart. The structure of the film is unconventional and intriguing. The performances are all solid. Even the writing, direction and cinematography are first rate.

I think the problem some critics had with the film is its sentimentality. It also requires a certain suspension of disbelief. If you apply real life standards to most films you’ll often find points that aren’t entirely plausible and realistic. But the positive aspects of this picture weighed so heavily on my conscience that these were minor criticisms in my view.

Seven Pounds held my interest from start to end. I felt real emotion building as I watched. I know that’s what the filmmakers wanted me to feel, but that didn’t bother me. I just went along for the ride and enjoyed it – even the sad notes.

I give the film’s star and producer WIll Smith a lot credit for making this picture. He really is one of the few true “movie stars” out there these days. He has a huge screen presence and his acting chops have genuinely developed over the past several years. Without his conviction about this material, this film clearly would never been made. That would have been a shame.

I think in the years to come Seven Pounds will eventually build a following. I’m already there in that camp. If you give this film a shot, I hope you’ll have as rich an experience as I did.

Seven Pounds is Rated PG-13 for a few instances of profanity, some intense situations and mild sensuality. I think some of the subject matter may be too intense for pre-teens without parental guidance.