Throughout history mankind has sought to find novel techniques for improving the way the brain works. In more recent times, this quest was often a direct response to test taking in the academic arena and job performance in our professional lives. In both instances, we are often asked to mentally function at a peak level while under a certain degree of stress. There is new research about a common food that just may provide an added mental edge when we need it most.

Earlier this week a presentation was given at the British Psychological Society Annual Conference in Brighton, England. The topic was the role that cocoa flavanols (a type of antioxidant) have on cognitive performance during a mentally demanding task.

Under discussion was a new study that had generated quite a lot of scientific buzz at the conference. The design of the trial included 30 healthy volunteers who were asked to consume one of three drinks on separate days. The beverages consisted of the following components: a) a cocoa drink with 520 mg of flavanols, b) a cocoa drink with 993 flavanols and c) a placebo drink (with no flavanols).

The researchers, based at the Brain, Performance and Nutrition Center at Northumbria University discovered a few interesting differences among the volunteers based upon what drinks they consumed:

Based on these findings, I did my own preliminary investigation to try and understand how cocoa extracts might benefit brain function. Here’s a summary of what I dug up: 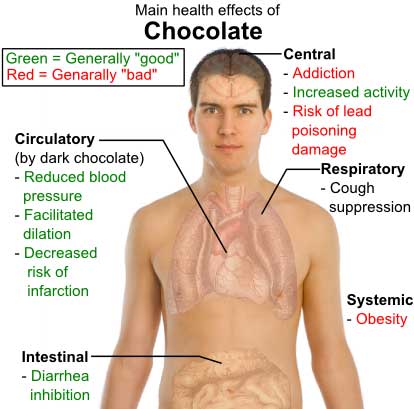 I want to add a comment about the picture above that illustrates the positive and negative effects of cocoa in the human body. The lead content of any high quality, responsibly produced cocoa should be minimal. If you have any question about this, do not hesitate to contact the manufacturer of the product you’re using and ask if they screen for heavy metals. If they can’t answer your questions satisfactorily, consider switching to another brand.

The warning about cocoa and obesity is not of real world relevance, provided that you don’t consume chocolate products that are loaded with lots of added sugar. As an example, the cocoa powder I use contains only 10 calories per tablespoon of pure, organic cocoa.

I know that I’ve used cocoa in a similar way to that described in the research presented today. Anecdotally, I do believe it helps to improve my mental performance. Further studies will help to better establish the optimal dosage of cocoa needed to provide the greatest possible cognitive benefits. I’ll keep a look-out for such information and do some personal experimentation while I wait. You might want to do the same.


4 Comments & Updates to “The Brain Drink”