Yoga for Anxiety and Depression

The ancient practice of yoga is as popular as ever. You’re as likely to find it in the trendiest parts of any given city as you are at remote Asian temples. Perhaps because yoga is often associated with both philosophy and religion, it hasn’t received a lot of scientific attention until recent years. But much like meditation, yoga is now being modified into more accessible forms that are starting to make their way into our modern system of health care. Here’s a brief overview of some of current findings about how yoga may be applied to improve your mental and physical health. 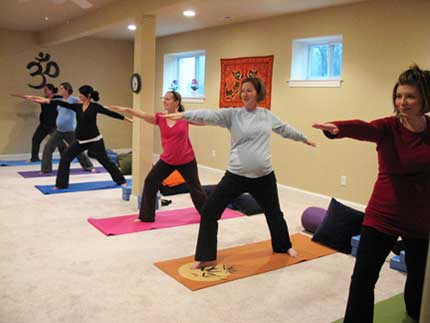 The Weight of the Evidence

A study that will be published in May of 2009 set out to examine yoga’s potential in managing weight and psychological health in a group of children and teenagers. The youngsters had ages ranging from 8 to 15 and were considered at high risk for developing type 2 diabetes.

14 of 20 children stuck with the program through its completion date. On average, they lost just over 4 lbs. An improvement was also noted in their perception of anxiety and in most cases of low self-esteem.

The psychological impact of yoga is often the primary driving force for people who practice it. Any activity that can help strengthen the body while improving our mental outlook is understandably highly desirable. But how well does it really work for elevating mood? A few studies from the last couple of months offer an encouraging answer to that question.

The most recent issue of the journal Complementary Therapies in Clinical Practice describes a trial in which yoga is used to help manage anxiety and depression. Here’s how the study was performed:

A 13% reduction in depression was noted in those practicing yoga. The authors of the study also proclaimed that, “Participation in a two month yoga class can lead to a significant reduction in perceived levels of anxiety in women who suffer from anxiety disorders. This study suggests that yoga can be considered as a complementary therapy or an alternative method for medical therapy in the treatment of anxiety disorders.”

Another application for yoga is as an aid to various disease treatment protocols. One example is presented in the April 2009 issue of Psychooncology. There, they describe the use of a gentler form of medical yoga called “restorative yoga” (RY). This modern form of yoga was specifically assessed with regard to any positive effects it might provide for women undergoing or having just recently completed breast cancer treatment.

The study, based at Wake Forest University, found that those engaging in RY exhibited demonstrable improvements in depression, fatigue, mental health, “positive affect” and spirituality (defined as “peace/meaning”). In addition, the women who began the trial with the most negative outlooks were found to benefit the most.

The final experiment I want to focus on concerns the role of sleep quality, mood and overall health in our senior population. This is extremely valuable data because a lack of sleep is known to exacerbate both psychological and physical health problems for people of all ages.

A total of 128 senior volunteers with no prior yoga experience participated in this 6 month study. Approximately half of the group engaged in a 70 minute “silver yoga” class, three times a week. The remainder of the volunteers served as the control group for the sake of comparison.

After just 3 months of the yoga intervention, significant mental and physical improvements were noted by the researchers. These benefits continued on through the entire 6 month trial. The authors of the experiment offered the following concluding remarks, “After 6 months of silver yoga exercises, the sleep quality, depression, and health status of older adults were all improved.”

In yoga we find a practice that tones both the body and mind. Much like Tai Chi, yoga is now being carefully tailored to fit the needs of people of all ages with a variety of health concerns and physical limitations. By eliminating both cultural and physical barriers, I believe that we’ll see the health promoting effects of this time honored practice reach more people than ever.


10 Comments & Updates to “Yoga for Anxiety and Depression”