If you’re a coffee lover, like me, here’s a simple, tasty hack that can help you start 2017 off right. I discovered this technique very much by accident. One afternoon, I was debating whether to have a cup of coffee or tea. I looked through my tea collection and considered the usual suspects: matcha, oolong and white tea. All three provide a bump in energy, albeit a milder bump, than coffee. Additionally, they’re abundant reservoirs of health promoting phytochemicals (catechins, flavonoids, theaflavins) not present in coffee. Decisions, decisions! 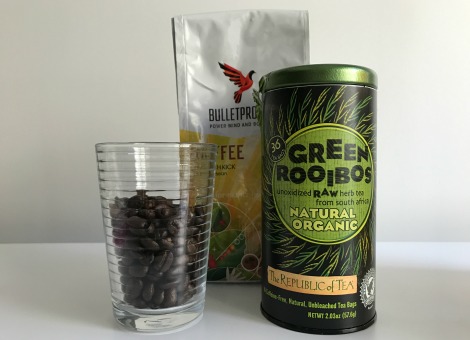 The question of “coffee or tea” has a long standing tradition in many cultures. But, combining the two isn’t the norm in any part of the world. Since they both contain caffeine, consuming them together is typically deemed redundant. The resulting flavor isn’t much to cheer about either. Trust me, I’ve tried it! Then it struck me: Why not combine a non-caffeinated, “herbal tea” with coffee in order to boost the healthful effects? Great plan! However, I soon realized that many of my caffeine-free, “go to” teas (chamomile, ginger, hibiscus) were incompatible with the strong flavor of coffee. Rooibos, on the other hand, has a set of characteristics that I suspected might work. Why so? Unfermented, green rooibos has a delicate, slightly sweet and unique taste that is easily covered up.

If you’re unfamiliar with rooibos (Aspalathus linearis), you’re probably not reading this in South Africa. The leaves of A. lenearis aka red bush or rooibos resemble tiny splinters of wood in their dried, fermented state. The unfermented leaves are known as green rooibos. The latter is milder in flavor and richer in rare and potentially therapeutic phytochemicals, including aspalathin, dihydrochalcones and nothofagin. A growing body of research has linked rooibos tea consumption to numerous health benefits in animal models. The positive findings reveal that antioxidants present in rooibos protect test animals from a broad range of maladies ranging from brain injury to diabetes. More importantly, a few human trials report that this medicinal bush improves oxidative status and a variety of cardiovascular risk factors – lowering LDL (“bad”) cholesterol and triglycerides, while raising HDL (“good”) cholesterol.

At this point you may be wondering if simply drinking rooibos tea instead of coffee may be the way to go. While I have no problem with that, I do want to point out that the vast majority of recent studies involving coffee demonstrate positive outcomes. Some of the conclusions are pretty obvious. For instance, one experiment revealed that students perform better in the early morning after having a cup of caffeinated coffee – in comparison to decaf. Having said that, other scientific discoveries are lesser known and not as widely publicized. I ask you: How many of your doctors recommend coffee as a way to lower the likelihood of developing metabolic syndrome, non-alcoholic fatty liver disease or non-melanoma skin cancer? But they could, based on many peer-reviewed papers appearing in prestigious medical journals.

Now that you know why I recommend adding rooibos to coffee, let’s get down to the process of making it. Brewing rooibos coffee is about as straight forward as you can get. If you use a French press, simply add 1-2 tablespoons of loose rooibos leaves to your ground coffee. If you use an espresso maker or instant coffee, I recommend steeping the rooibos separately in a small amount of purified water (for up to 15 minutes) and then adding it to your fresh brewed coffee. Typically, I toss in a few tea bags worth of rooibos for every cup of coffee. Another approach is to brew several bags or a few ounces of loose leaves at one time. Add a small amount of the resulting decoction to every cup of coffee, and save the rest in the refrigerator for subsequent coffee breaks. It keeps just fine for several days. If you decide to try it, I hope you’ll enjoy it as much as I do. Cheers to you all!

Study 7 – Association between the Prevalence of Metabolic Syndrome and … (link)

Coffee Improves Memory Performance in “Non-Optimal Time of the Day” 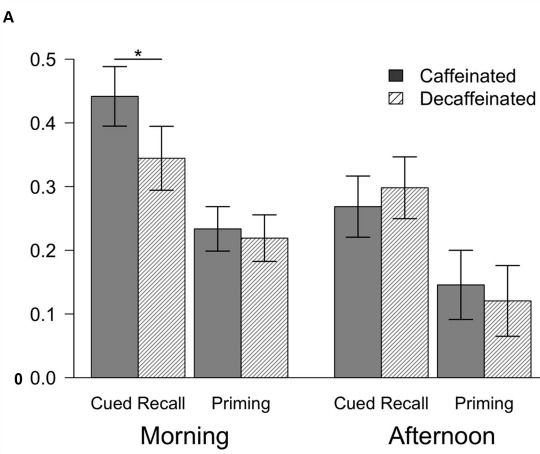