Dr. Bertram Pincus doesn’t like people very much. Actually, he doesn’t mind them, provided that they stay quiet, avoid annoying him in any way and steer clear of engaging him in any form of genuine human interaction. He’s a dentist with a mission: to live his life on his own somber terms without being bothered by his neighbors and patients.

But a funny things happens to Dr. Pincus during the course of a routine colonoscopy. While under general anesthesia, he dies for “almost 7 minutes”. When he comes back to life, a major shift occurs in they way he views the world around him. He is able to see ghosts roaming the streets of New York! But the ghosts are even more surprised that someone can finally see them. Did I mention that this is a comedy? 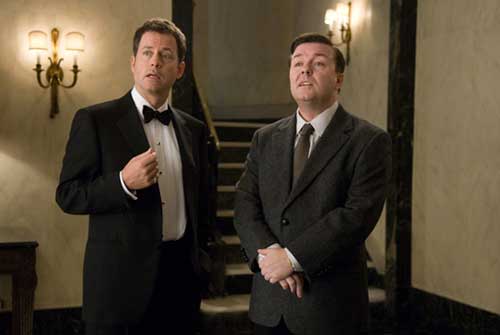 The ghosts begin to follow Dr. Pincus everywhere. Why? Because they all have unfinished business in the living world that they can’t take care of themselves. They can see things going on around them, but they’re powerless to do anything about it. And because the doctor, a reclusive misanthrope, is the only one who can see or hear them, he is their only hope.

Ricky Gervais, one of the creators of the original British version of The Office and the HBO hit Extras, fills the title role in Ghost Town. The primary ghost is portrayed by Academy Award nominated actor, Greg Kinnear. His character is/was a fast talking philanderer who finds himself in limbo roaming New York with the other spirits caught between the worlds of the living and the dead.

At the heart of the film is a mission with which Greg Kinnear’s character desperately needs assistance. He believes that his widow (the lovely Tea Leoni), to whom he was unfaithful, is about to marry another unworthy cad. In exchange for being left alone again, he demands that Dr. Pincus stop this train wreck before it comes to pass. The trouble, of course, is that Dr. Pincus not only detests all social interaction, but is particularly hapless with the opposite sex.

Ghost Town is one of those films where, at certain points, you think you have it all figured out. But with comedies like these, how you get to the finish line that you know is coming determines whether you enjoy the ride. There were definitely some unexpected turns along the way, many smiles, some good chuckles and a nice balance between cutting humor and the kind of warmth that is only generated by a skilled screenwriter, a capable director and well delivered performances.

At one point in the film Tea Leoni’s character asks Dr. Pincus if he’d like to accompany her to a gala event at a museum. He turns her down. Ms. Leoni asks, “You don’t like crowds?”. Pincus replies, “It’s not so much the crowds as the individuals within the crowds.”

Another positive for me is that the film was shot in New York during the change of seasons. This makes for a beautiful setting and a fitting backdrop for the transformation that occurs in the lives of both the living and the dead. It’s a beautifully photographed motion picture – especially for those of us who don’t visit New York very often.

The biggest hurdle for films of this genre is that they introduce us to a fantastical world that may be hard to believe. A supernatural premise is offered up and a world is created which sometimes wind up revealing numerous holes and inconsistencies. That’s not the case here. Things happen in a way that is believable given the rather magical story line.

I think Ricky Gervais gives a fine and nuanced performance in his first major motion picture. He’s got comic timing down to a science. Greg Kinnear and Tea Leoni are also right on the mark with characterizations that demand broad comedic and dramatic turns in alternating scenes. In fact the entire cast left a likable, if not memorable, impression on my movie-going mind.

I can’t proclaim that this is a great film. But it isn’t trying to be that. It just wants to entertain and maybe, ever so slightly, graze our hearts and remind us of some important truths. I don’t know that I could or would want to ask for much more than that.

Ghost Town is Rated PG-13 for some strong language and a few sexual references. Apart from the scattered profanities, I’d say it’s not much racier than your typical network sitcom. Older children and teens are unlikely to see or hear anything too shocking here.