May 3rd, 2009 is World Laughter Day. Normally I wouldn’t go out of my way to mention something like that. But I feel it’s especially relevant to do just that today. You see laughter is no longer simply the domain of clowns and stand up comedians. These days, scientists want in on the hilarity as well, and are focusing on the very serious side of humor in promoting heart health.

The results of the following study will be presented at the 122nd Annual Meeting of the American Physiological Society this weekend. The experiment itself is a fascinating example of the power of integrative medicine.

Twenty diabetics with both high blood pressure and elevated cholesterol were enrolled in the trial. The participants were split into two groups. Both groups were given medications to address their diabetes, hypertension (high blood pressure) and hyperlipidemia (high cholesterol). Half of the patients were exposed to laughter therapy. The remainder only received the prescribed medications. All of the volunteers were followed for 12 months and had periodic blood tests to determine the status of their heart health, inflammation and stress hormone levels.

The results of the study were impressive and irrefutable. Here’s a brief overview of what the scientists found:

All of the changes noted in the laughter group are strongly associated with a reduction in heart disease risk. Dr. Lee Berk, a preventive care specialist and psychoneuroimmunologist, offered these concluding remarks, “the best clinicians understand that there is an intrinsic physiological intervention brought about by positive emotions such as mirthful laughter, optimism and hope. Lifestyle choices have a significant impact on health and disease.” 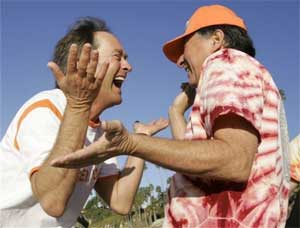 Another study that was published in February 2009 adds to the established benefits of laughter on cardiovascular health. In that trial, 18 healthy adults were asked to watch two 30 minute segments of either a laughter or stress provoking film. Testing was conducting to determine changes in circulation and stress hormone levels.

The researchers determined that laughter improved circulation by lessening arterial stiffness and lowered stress hormone levels. It’s well established that hardening of the arteries is implicated in both heart attacks and strokes.

In 2006 a separate experiment found similar results. Twenty healthy adults were asked to watch a portion of a stressful film, such as the opening sequences of Saving Private Ryan. 48 hours later, they watched part of a comedic film, such as There’s Something About Mary. The researchers tested the volunteers’ blood flow prior to and after exposure to each type of film. Here’s what they found:

This is serious medicine in the form of a joyful and playful activity. Almost every one of us can utilize laughter to improve our mental and physiological states. It’s completely free of charge and, best of all, it’s contagious. The next time you cause someone else to laugh, you can feel even better knowing that good health has been enhanced by sharing a good chuckle.