Vitamin B12 and Eczema

One of the more difficult things for a parent to endure is seeing a child suffer from a chronic condition. It’s especially hard if the condition affects the skin, which often attracts unwanted attention and can cause psychological distress as well.

Eczema is one of the most common skin disorders in young children and some adults. It may affect as many as 20% of children in the USA. Eczema is defined by an irritation and swelling of the skin that frequently involves extreme dryness and itchiness.

There are conventional treatments available for eczema, but they carry the risk of serious side effects. One reason is the need for long term term treatment, as eczema is incurable. In addition, the condition frequently covers large areas of skin, thereby necessitating large amounts of medication. 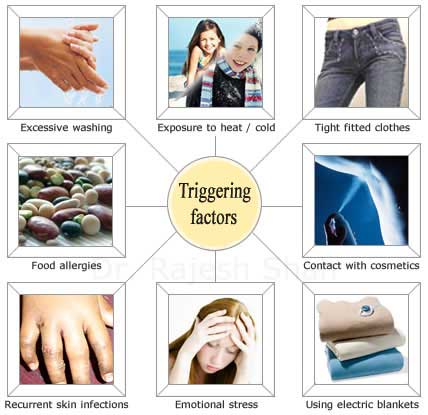 The April 2009 issue of the Journal of Alternative and Complementary Medicine provides a viable and safe alternative to the potentially dangerous drugs that are in use today. A trial was set up to investigate the efficacy of a Vitamin B12 cream in the treatment of children with atopic dermatitis (eczema).

Twenty-one patients with ages ranging from 6 months to 18 years enrolled in this 4 week trial. Each volunteer applied either a Vitamin B12 cream or a placebo cream to symptomatic areas on opposite sides of their bodies. For instance, the B12 cream was only applied to the right side and the placebo was exclusively used to treat the left side. This allowed for a comparison model for the two treatments.

At the end of weeks 2 and 4, an investigator performed skin checks using a “standardized scoring system”. The findings were expressed in this manner, “Skin treated with topical vitamin B(12) improved significantly more than placebo treated skin at 2 and 4 weeks. Topical vitamin B(12) should be considered as a treatment option in children with eczema.”

In May of 2004 another study was presented in the British Journal of Dermatology. It was a larger experiment that focused on adults with eczema. In it, 49 participants applied a Vitamin B12 cream or a placebo cream to opposite sides of their bodies. They did so for a total of 8 weeks.

Those applying the B12 cream noted a 55% improvement in their eczema symptoms. When the volunteers were asked to describe the effects of both creams, in most cases they evaluated the B12 cream as being “good” and “very good”. The placebo cream was generally described as being of “moderate” use or providing “poor” results. Based on symptom regression and patient feedback, the researchers concluded that, “These results document a significant superiority of vitamin B(12) cream in comparison with placebo with regard to the reduction of the extent and severity of atopic dermatitis. Furthermore, the treatment was very well tolerated and involved only very low safety risks for the patients.”

It appears that other severe and chronic skin maladies are receptive to topical B12 treatment as well. In 2001, a study was described in the journal Dermatology. This time the focus of the scientific inquiry was the management of chronic plaque psoriasis with an avocado oil and B12 cream.

Instead of a placebo, a Vitamin D based medication was compared to the B12 cream. Vitamin D analogs have been traditionally used with some success in managing the symptoms of psoriasis. Exposure to natural sunlight, which the skin uses to produce Vitamin D, is also known to benefit some psoriasis sufferers.

Over the course of 12 weeks, 13 female and male volunteers were provided both treatments. Once again, the investigators utilized a “right/left side comparison technique” to determine the respective effects of each type of treatment.

The Vitamin D based medication brought about quicker results, but they tended to fade after 8 weeks. The avocado oil/B12 cream’s positive effects remained constant throughout the 12 week period, and both the patients and the investigators found that it was better tolerated. Because of the more consistent therapeutic effect and greater tolerability, the B12 topical was considered better suited for the “long-term treatment of psoriasis.”

% of Children with Asthma or Other Allergic Conditions in 2007

It’s great to know that there are safe and natural topical treatments that can help reduce the symptoms of eczema and psoriasis. But it’s important to remember that what you put into your body can also have a profound effect on the condition of your skin. In particular, food allergies and sensitivities, an imbalance of the good and bad bacteria in the digestive system and a lack of healthy fats in your diet can all contribute to the worsening of skin conditions such as eczema. If we only approach skin disorders from the outside in, we’re missing a big part of the picture.