You probably know somebody like Poppy Cross, the lead character in director Mike Leigh’s Happy-Go-Lucky. Someone whose cheerful and positive nature never seems to fade. In good times and bad, her effervescent personality and smile simply cannot be contained. It’s her point of view about life and when others don’t share it, she feels compelled to help them join in her happiness parade. But have you ever wondered what really goes on in the head of someone like that? What makes them tick? Happy-Go-Lucky takes us deep inside the life of one such character. It’s a journey that invariably provides glimpses of joy and laughter, but also a certain sadness that finds any individual who marches to the beat of their own drummer. 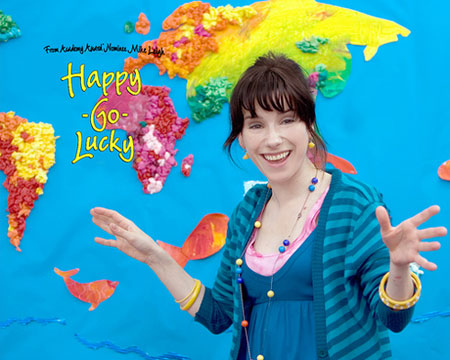 Sally Hawkins plays Poppy in a pitch perfect portrayal. She’s an enthusiastic elementary school teacher who loves the challenges her job presents and all of the children in her care. It’s hard work, but she’s actually energized by the time with her students. Perhaps it’s because they possess a similar innocence and purity of heart.

At the start of the film, Poppy’s bike is stolen. Rather than bring her down, it just presents her with a new opportunity. Poppy feels a certain nostalgia for her beloved, stolen bike and can’t imagine replacing it with another. So instead, she decides to sign up for driving lessons.

Scott, the driving instructor who arrives at Poppy’s apartment is an ultra-intense, world weary, conspiracy theorist played to the hilt by Eddie Marsan. This guy makes General Patton seem laid-back. Their clashing personalities provide some of the more compelling insights into what makes them both tick. You might think Poppy will be steamrolled by such a powerful personality, but you’d be surprised. In their first meeting, Scott inquires, “What am I supposed to call you?” Poppy replies, “Oh how ’bout, Poppy?” Scott wonders aloud, “Poppy?” Poppy cheerfully responds, “Yeah. No, whatever turns you on Scott. I don’t mind.”

At the center of Poppy’s social life is a core group of friends and co-workers. The only thing thing that’s obviously missing is any form of romantic connection in her life. Not only are we left wondering if and when it will happen, but we’re rooting for it to happen.

I won’t spoil the fun you’ll have guessing where Poppy’s life will take her during the course of the film. I can only tell you that there’s nobody better at presenting a realistic feel to the life of fictional characters than Mike Leigh. Wherever he steers a film, I tend to believe it’s plausible and true to life. Happy-Go-Lucky continues this trend in his magnificent career.

If I have one reservation about this film it’s that the characters all speak in rather thick, British accents. This certainly adds to the authentic feel of the world presented, but I must admit that at times I did miss some of the dialogue. This is, however, a minor quibble, as it certainly didn’t detract from my overall enjoyment of the film.

Mike Leigh was nominated for an Academy Award for his Best Original Screenplay for Happy-Go-Lucky. It’s well deserved. The beautiful performances throughout this film are dutifully strengthened by the seamless dialogue. The real reason to see Happy-Go-Lucky, and most of Mike Leigh’s films, is to have the pleasure of meeting the colorful and rich characters that inhabit his screenplays. It’s a genuine pleasure and a joyful experience, even when the content hits a somber note.

Happy-Go-Lucky has been granted a rather harsh R-Rating by the MPAA. It contains a few instances of strong language, but it hardly seems worthy of an “adults only” classification. It may not be of much interest to younger audiences, but I don’t think there’s any reason for mature adolescents not to see this film. It’s currently available on DVD and comes highly recommended by me.