When you look at yourself in the mirror, do you see a “beer belly”? Do you sometimes have trouble with balance, coordination and memory? Is it more difficult to exercise and catch your breath when you do? If you answered ‘yes’ to any of these questions then you’re in good company. Most people experience some or all of these symptoms and others as a “normal” consequence of growing older.

But just because something could happen doesn’t mean that it’s inevitable. Why should we accept the current model of aging when science is telling us that we can exert some control over it? I’d like to share with you three delicious foods that may help counter some of the most common signs of aging.

Blueberry Walnut Cobbler With a Cup of “Joe”

A new study from the University of Michigan Cardiovascular Center offers hope to everyone out there with a little too much padding around their midsection. The accumulation of abdominal fat is believed to be connected to insulin resistance and is frequently accompanied by an increased risk of diabetes and cardiovascular disease. This is not unheard of in younger adults, but becomes increasingly common as we enter our senior years.

In this brand new study, laboratory rats had a freeze-dried blueberry powder added to their food for a 90 day period. The blueberry content comprised 2% of their total diet. Here’s a summary of the changes that this dietary intervention provoked:

Scientists from the USDA Human Nutrition Research Center on Aging recently tackled a different aspect of aging. They wanted to test the effects of several walnut-enriched diets on the mental performance of aged rats. The older rats were fed a diet that contained either 0%, 2%, 6% or 9% walnuts for a total of 8 weeks. The rats that ate the 2% and 6% diets showed improvements in age-related balance, coordination and memory.

It’s interesting to note that the 9% group actually showed a slight worsening in memory skills. Therefore, the researchers currently suggest sticking to a daily intake of about 1 once (about 7 to 9 walnuts). This amount would approximate the 6% dosage given to the aged rats in the study. 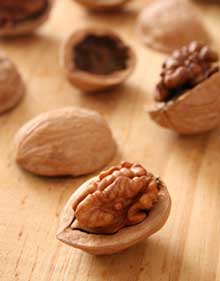 It’s unclear exactly why walnuts have a brain boosting effect, but it could have something to do with their natural omega-3 fatty acid content. This form of fat is well know to benefit various aspects of brain health. Walnuts are also a rich source of a few key amino acids (components that make up protein) that may promote healthy circulation (arginine) and a peaceful state of mind (tryptophan). A final theory is that protective antioxidants in these nuts could conceivably shield the brain from age-related damage.

Our last pit stop of the day takes us to the most recent issue of the American Journal of Epidemiology (the study of diseases in populations). An analysis of over 10,000 people appeared to find a connection between regular coffee consumption and a more youthful set of lungs. Here’s the evidence reported:

Once again, antioxidants are likely to be responsible for at least some of the benefits found. Coffee’s natural caffeine content may also play a role. Further research will hopefully help to clarify the exact mechanism by which coffee protects and supports aging lungs.

I’m thrilled to see trials like these being conducted, because it empowers individuals who want to manage their own health care destiny. If we inform ourselves and actively choose a nutritious diet and a positive lifestyle, then we may very well be able to live healthier, longer and younger lives (at any age) than prior generations.