A fascinating case report was presented in the February 2009 issue of the journal Nutrition and Metabolism. It documents the transformation of a 70 year old woman who had suffered from schizophrenia since the age of 7. The most remarkable aspect of her return to wellness is that it was prompted by a simple shift in her diet. What’s even more important to note is that this miraculous healing is not an isolated event.

The woman who is featured in the case report presented a variety of common schizophrenic symptoms, such as attempted suicide and bodily harm, auditory and visual hallucinations, confused speech. fatigue, obesity and “poor attention to hygiene”. She was on numerous medications to help address the illness and other unrelated health conditions. But even while taking an extensive list of medications, her condition worsened.

Because of her weight, poor general health and her lack of response to the medication, this lady (known only as “C.D.”) was placed on a gluten-free, low carbohydrate diet. Gluten is a potentially allergenic protein found in wheat and other popular grains. C.D.’s daily diet was comprised of 4 oz of “hard” cheese, eggs, meat, 2 cups of salad and 1 cup of non-starchy vegetables. Her total carbohydrate count was kept under 20 grams per day, often referred to as a “ketogenic diet”.

After just 7 days, C.D. reported feeling “well” and more energetic. By day 8 she was completely free of the auditory and visual hallucinations. She also commented that she felt much calmer at her next evaluation on day 26. Over the course of the next 12 months, C.D. maintained mental stability and also lost some weight.

It’s unclear whether the changes found in C.D. are the result of carbohydrate or gluten restriction. One other study from 1965 found a possible connection between ketogenic (very low carb) diets and schizophrenic improvement. But even if we consider that research and this current case study, we’d have to admit that this is highly preliminary information. It’s regrettable that there isn’t more for us to go on at this time.

The uncertainty about the role of gluten in schizophrenia is more abundant and scattered throughout the medical literature of the past several decades. Several studies suggest that a gluten-elimination diet may be worth considering as a safe and natural therapy for some schizophrenics.

Celiac Disease Is Characterized by Inflammation and Oxidative Stress 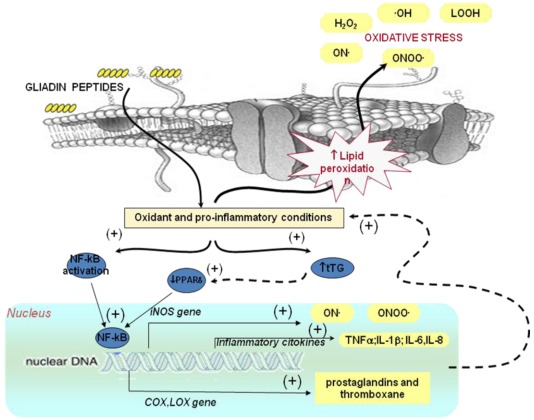 Schizophrenia is generally considered a chronic condition. In some instances, such as in the case of C.D., it’s virtually a life long affliction. The prescription medications used to treat it are sometimes necessary but, unfortunately, often not ideal because of reported side effects and variable symptom management. Dietary interventions may offer a very real alternative for some individuals struggling with such mental disorders. I believe it’s something worth investigating with the assistance of knowledgeable and open-minded medical professionals.