A highway cuts through the heart of a nighttime desert landscape. On it we find an orphaned cheetah cub carefully testing the pavement with every trembling step. His eyes are wide open, his ears stand at full attention. What is this place? He wonders why a bright light is heading right toward him, making an unfamiliar sound. The light draws brighter and closer with each second. The sound roars louder and the ground begins to vibrate. The cub holds steady, not so much out of courage, but rather confused paralysis.

At the last possible moment, the on-coming motorcycle swerves away! Two figures, a man and a child, hop off the bike and approach. The smaller of the two carries a net and places it over the cub, scooping him up just before a thundering commercial truck barrels past. So begins Duma. 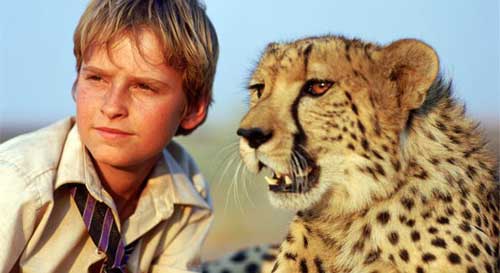 The man (Campbell Scott) and boy are a father and son (Alexander Michaeletos) coming home from a camping expedition. They decide to take the baby cheetah to their farm and raise him themselves with the understanding that one day they will have to return him to the wild. The family farm is run by Hope Davis, mother and wife, who we quickly learn is as adventurous and as much of an animal lover as they are.

This is an ideal arrangement for this larger than life family. Duma, the name given to the growing cat, is provided with a loving home and a second chance at life. Xan, the young boy, has the opportunity to learn how to be responsible for something other than himself. Xan’s mother and father also find in Duma a vehicle that allows them to bond more deeply with their son and teach him important life lessons.

As Duma, which is the Swahili name for ‘cheetah’, matures into a fully grown cat, the family is reminded of their original bargain. Xan protests that Duma doesn’t want to be wild. He wants to stay with them. But his father explains tenderly, “He’s a wild animal. Remember? His wildness is something he knows without even knowing it. Like a memory. Like I know that I belong here on Grandpa’s farm.”

Together they plan to return Duma to a lush locale near where they found him in the Erongo Mountains. There, food and safety will hopefully be found. His old home would become his new home once again. This is the only way they can help give him a chance at surviving where he truly belongs.

Such a journey would be hard enough for a father and son to embark on together. Now imagine what it would be like for a young boy to attempt it all by himself. That’s the adventure we’re taken on. A boy and his cheetah, traveling through hundreds of miles of harsh South African desert and wild jungle terrain – a land with “many teeth”.

Duma was directed by Carroll Ballard who is probably best known for his 1979 Academy Award nominated film, The Black Stallion. He also helmed one of my favorite films from the 1980’s called Never Cry Wolf. There is simply no one better at telling tales about the relationship between civilization and the wild than Mr. Ballard. He’s also as good as it gets in crafting “family films” that can actually appeal to every member of the family.

I wish this film had been released when I was much younger. This is the kind of adventure that is a genuine thrill for kids of all ages. It’s filled with so much natural beauty and “edge of your seat” suspense. What a rarity to find entertainment that makes your heart race, break and rejoice all in the course of under two hours.

Duma is a rich experience that families should enjoy together. I really believe that’s the ideal way to view this picture. It carries a PG-rating for some strong emotional content (and “mild adventure peril”) that may be a bit too intense for very young children. There is no foul language, drug content or sexual references. This is a good, old fashioned flick that could have very easily been made 50 years ago.

When Duma was released in 2005 it was highly praised by critics, but largely ignored by audiences. I hope that it will find renewed life now that it’s out on DVD. This is a rousing and timeless tale that can be enjoyed now and, hopefully, for many years to come.