I’ve discussed the importance of probiotics in the past. Probiotics are friendly bacteria that primarily inhabit the digestive system. They play a role in everything from helping to break down food to improving immune function, and even supporting healthy mood. Eating cultured and fermented foods and supplementing with probiotic supplements is one way to increase the number of these desirable microbes. But there’s another strategy that can support the growth and population of these intestinal helpers – by eating and supplementing with prebiotics. 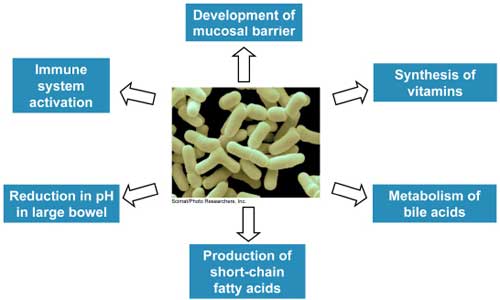 The Effects of Probiotics in the Body

Prebiotics are a special class of carbohydrates and soluble fibers that are not digested in the upper GI tract. Instead, they make their way down to the colon where they naturally ferment. This fermentation process selectively promotes the growth of beneficial bacteria which help support intestinal and overall good health.

An interesting development has recently emerged in prebiotic research. It appears that these unique carbohydrates may actually curb appetite and encourage weight loss. Let’s examine two studies that suggest a connection between a prebiotic called “oligofructose” and weight.

A 2007 scientific review confirms the triglyceride lowering effect of inulin and oligofructose, the two most popular prebiotics. (3) This effect is quite interesting because similar carbohydrates, such as common fructose, have the opposite/harmful effects in the body. (4) But what’s even more surprising is that prebiotics may actually help to mitigate some of the damaging effects of fructose in our diets. This was most recently exhibited in a study that found that prebiotics prevent a rise in blood pressure in rats that suffer from “fructose induced elevated blood pressure”. (5) Collectively, these findings present a hopeful role for prebiotics in the promotion of cardiovascular health.

Another intriguing use for prebiotics is to assist with the absorption of essential minerals. The assimilation of minerals such as calcium, copper, iron, magnesium and zinc are all positively affected by the presence of prebiotics. (6) One manifestation of this is in regard to improved calcium uptake that may lead to a strengthening of bone structure. (7)

When I searched through the many studies on prebiotics, I was impressed by their potential application in a wide variety of conditions. For instance, there’s great interest in the role that inulin and oligofructose may play in the fight against colon cancer. (8,9) Many digestive conditions, such Irritable Bowel Syndrome (IBS), also appear to be responsive to prebiotic therapy. (10,11) Even the immune system of both young and old is stimulated can be stimulated by prebiotics. (12,13)

Evidence derived from human and animal toxicology studies point to a high degree of safety with regard to these special carbohydrates. (14) In fact, one study published in the December 2008 issue of the British Journal of Nutrition found that rats who consumed a prebiotic blend lived longer than those receiving a placebo. (15) We can’t necessarily count on that same effect in humans, but it’s reassuring to know that it’s at least present in an animal model.

As an added bonus, prebiotics have a naturally sweet taste. At the moment I’m using a stevia and luo han guo sweetener that both contain prebiotics in their base. Adding oligofructose and/or inulin to these non-caloric, natural sweeteners allows them to have a similar volume and weight as common table sugar. This makes it easier to measure and use them for everyday cooking and sweetening needs.


19 Comments & Updates to “Prebiotics and Probiotics”