Every time we ride in the car with the raining pouring down we benefit from the “flash of genius” of one Mr. Robert Kearns. Like many inventors before him, he found a flaw in a commonly used device that has since improved the lives of countless drivers and passengers throughout the world. That fact alone is enough to make him a notable individual. But that’s just the starting point of his life’s story.

In the past, windshield wipers operated in a very crude and methodical fashion. It didn’t matter if it was raining “cats and dogs” or simply sprinkling lightly. The old wipers all worked at the same speed regardless of the circumstances. That is until Robert Kearns, an engineering professor, invented a more responsive wiper – a version of which has appeared in over 145,000 car models for over 40 years. 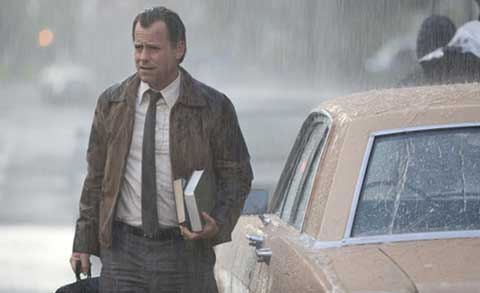 The “intermittent windshield wiper” was invented in the low-tech environment of Kearns’ family garage. Robert’s only support team was his wife and six children. It was a group project from the beginning and a great source of exhilaration and pride for them all.

The invention was so practical and effective that it even impressed top level management at Ford Motors. A deal was put into place to utilize this new technology in all of the new Ford models in the years to come. But just as Mr. Kearns is about to begin manufacturing his invention, Ford pulls out of the deal. It’s a devastating blow that turns a possible fairy tale into one engineer’s nightmare.

Having a dream crushed is hard enough. But when Robert realizes that Ford has stolen his technology and put it in their new line of Mustangs without paying or giving him credit, he spirals into a seemingly endless and futile quest for justice. He is a lone man with few resources against a giant corporation with nothing but time, money and lawyers at their disposal.

This is the point where we first meet our protagonist. The battle to make things right has sent him over the edge. He’s unshaven, disheveled and seated in the backseat of a Greyhound bus in his pajamas. Two policemen board the bus and compassionately escort him away to a mental hospital.

Greg Kinnear is the heart and soul of this fact-based and inspirational film. It’s not an easy role to inhabit. The real Robert Kearns was known for being rather uncharismatic and obsessed to a fault with avenging the wrong that was done to him. The damage that this dogged pursuit causes his family, friendships and professional life aren’t always easy to watch. But the same cannot be said for Kinnear’s performance. It’s an excellent and riveting piece of work.

The supporting actors are also quite strong. It’s an eclectic bit of casting that harnesses the acting chops of old veterans like Alan Alda, Dermot Mulroney and the always refreshing Lauren Graham. Likewise the direction and look of the picture is spot on. This film spans a time period ranging from the 60’s to the 90’s and does so convincingly.

It’s really quite amazing to note that this was directed by a first time director, Marc Abraham. Many debut directors aren’t confident enough to take the necessary time to tell a true story. In this case, there isn’t a lot of fancy dialogue or dazzling special effects to hold our interest. Mr. Abraham was dogged in his own pursuit to get this picture made. Perhaps he hoped that the magic of this material would translate to the audience as well. It certainly did for me.

Flash of Genius has a powerful story to tell that deserves to be known. I’m glad that I now know who Robert Kearns is and I will often think of him as I drive in the rain. I’m also grateful for the reminder about what we can all achieve if we’re willing to make the effort to stand up for what’s right. No obstacles are too great if determination and willingness to sacrifice are even greater.

This film was granted a rather severe PG-13 for a few instances of profanity. I think it’s appropriate for all ages, but the pacing may be a little slow for very young audiences. Many critics received it warmly, but it never caught fire at the box office. I think it’ll do much better on DVD and cable because it tells a well-told tale that speaks directly to the human spirit. I hope it speaks to you as well.