Rooibos is a green shrub that is found almost exclusively in South Africa. There, its leaves and twigs are frequently used to brew a medicinal tea. But it isn’t very well known anywhere else. I believe that’s going to change in the near future, thanks to a strong trend of positive scientific findings, the most recent of which suggests an application for rooibos in the management of diabetes.

Rooibos tea is sometimes referred to as African tea or red bush tea. The reddish color that is often present is a result of an oxidative process that some manufacturers employ. There are also unoxidized rooibos teas on the market, which produce a yellowish tea instead. The unoxidized variety reportedly contains a greater concentration of antioxidants. This is similar to the example we find when comparing green tea vs. black tea. The green, which undergoes less processing, is considered more health promoting. (1) 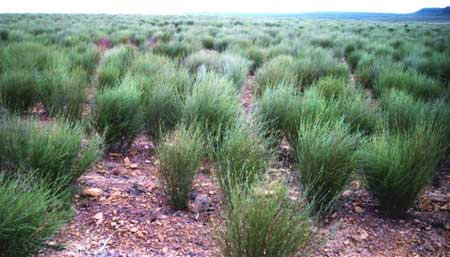 Traditionally, rooibos has been used to address a broad array of conditions such as allergies, anxiety, asthma, colic (in babies), digestive complaints, inflammation, lung issues and skin disorders. (2) In recent years, the scientific community has primarily focused on its ability to protect the liver and combat cancer in a laboratory setting. (3,4,5,6,7,8)

Another reason for this tea’s popularity is that it’s not bitter. Instead, it has a mildly sweet taste that lingers even after long brewing. In addition, rooibos is devoid of caffeine and has a very small tannin content. (9) Tannins are phytochemicals present in regular tea that can negatively impact the absorption of certain minerals.

A strong form of “African tea” was recently tested in a group of diabetic mice and men by the University of Copenhagen. In the mouse trial, 6 weeks worth of rooibos tea supplementation plus a low-fat diet led to positive changes in the health of the eyes and pancreases of the mice. Both are sites that are commonly damaged by diabetic progression. (10)

In the human arm of the experiment, 23 type-2 diabetics were given a daily dose of about 25 ounces of rooibos tea. At first, the researchers didn’t find much of an effect on the volunteers’ blood sugar levels. But by the end of the four month experiment, there was a significant improvement in glucose tolerance. There was also a change in the fatty acid content of the blood. It appears that the rooibos increased the level of polyunsaturated fats in the volunteers. This is a positive change that may allow cells to better absorb blood glucose, which should result in lower blood sugar levels and insulin production.

Rooibos Thrives in the Cape Town Region of South Africa

A different study published in the May 2009 issue of Phytomedicine, found that a component of unoxidized rooibos (aspalathin) improved blood sugar uptake in the muscles of diabetic mice. A test tube experiment, using human pancreatic cells, determined that this same phytochemical (plant chemical) could stimulate the production of insulin in pancreatic beta-cells. (11)

A 2006 trial also demonstrated that the antioxidants in roobios specifically protect the cardiovascular system and ocular (eye) health in diabetic rats. The authors of that research concluded that, “rooibos tea as a commonly used beverage can be recommended as an excellent adjuvant support for the prevention and therapy of diabetic vascular complications, particularly for protecting ocular membrane systems against their peroxidation by reactive oxygen species.” (12)

If you decide to use rooibos, I suggest that you seek out an organic, unfermented “green” rooibos tea or supplement. Since I don’t manage to drink tea multiple times throughout the day, I prefer to make a stronger tea by using two or more bags per cup. I also make it a point to squeeze the tea bags into the cup after brewing. The antioxidants in rooibos may also be absorbed through the skin. So you can use the spent tea bags to cleanse your face or add a few drops to your moisturizer. (13)


9 Comments & Updates to “Rooibos and Diabetes”