Home > Movies > The Diving Bell and the Butterfly – Movie Review

The Diving Bell and the Butterfly – Movie Review

We don’t know where we are. Bursts of light and muted images of people move in and out of focus. It soon becomes clear that we’re lying in a hospital bed. There’s quite a commotion going on around us. We wonder, “What are we doing here?”. Is this all just a vivid dream or perhaps a nightmare?

The Diving Bell and the Butterfly puts us inside the body and alongside the thoughts of a man named Jean-Dominque Bauby (“Jean Do”). He’s not a fictional character. Jean was the editor of French Elle magazine in the 1990’s until he suffered a massive stroke that left him completely paralyzed with the exception of the use of his left eye and a fully functioning mind. This is an extremely rare state of being that is known to neurologists as “locked in syndrome”. 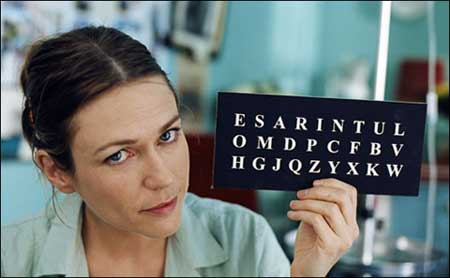 The very thought of such an existence is terrifying and experiencing a film that’s primarily told from Jean’s perspective might seem like a real downer. It’s not. I won’t deny that your heart might crack from time to time. But I think you’ll feel more alive by the time the trip is over. You may even feel grateful to be able to walk where you please, hug your loved ones whenever you wish and generally live life to the fullest . This is the power of a great film that’s made even more potent because it’s based on real life events.

There’s no “sugar coating” in Diving Bell. At first Mr. Bauby wishes death upon himself. Not only does he feel powerless to express himself and live his life, but he’s also saddled with all the memories of his previously self-absorbed existence. Prior to his illness, Jean lived a fast 43 years of life. It was an era populated with even faster women and the finest possessions that money could buy. But his children lacked a real father. Their mother was dealt an absentee husband and friends were left with calls unreturned.

One of Jean Do’s neglected friends visits him at the countryside rehabilitation hospital where he lived for nearly two years. Their friendship was severed after his friend was held hostage for 4 years in Beirut. Jean never contacted him upon his release because he felt guilty about having given him his seat on the plane that was highjacked. “Being held hostage isn’t so different from your situation”. His friend explains that the only way he survived was, “by clinging to what makes me human. It was all I had left. Same as you.”

Bauby is fortunate to have a hopeful team of supporters surrounding him. Chief among his angels is a speech therapist who painstakingly concocts a method by which Jean can communicate with others one letter and blink at a time. This breakthrough opens up the grand possibility of a new window on life. Not long after, a call is placed to Jean’s his old literary agent on his behalf to inquire about a prior contract that called for him to write a book. This becomes his new mission in life – to share the experience of his existence so that others can understand what “locked in syndrome” is really like. It is this very book that is the basis for the film.

Cinematically speaking, the thought of being trapped in a disabled man’s head seems awfully limiting. But what a head it is! Jean’s imagination is always in overdrive. He may be immobile and unable to verbalize, but his thoughts come shining through. In his mind he skis the tallest mountains, surfs the most radical waves and visits exotic and remote locales all around the world. There’s even laughter. At one point he dreams of his past, seeing pictures of his youth and happier days. Then, he starts imagining himself as a famous, handsome actor. “That’s Marlon Brando. Not me!”

The Diving Bell and the Butterfly was directed by Julian Schnabel, a New York based painter turned filmmaker. This is his third biographical film. The first two, Basquiat and Before Night Falls also received much critical acclaim. In this outing, he somehow managed to make me feel helpless, hopeful, sad and wonderful about the possibilities present in every life. The imagery in this picture is so dynamic and vivid. The performances are uniformly fantastic. The music, the pacing and particularly the cinematography and editing are outstanding.

The film is a US-French co-production, subtitled in French. In fact, Mr. Schnabel is reported to have learned French in order to truly understand how the dialog came across. It is Rated PG-13 for some rather intense emotional content and sexual situations, including some nudity. I think it’s best suited for mature teenagers and adults. It’s a vessel for many valuable lessons, but it may be too emotionally demanding for very young viewers.

The Diving Bell and the Butterfly is now available on DVD. I think it’s one of the best films in recent years. It left an indelible mark on my consciousness, and I think it truly has the potential to make a difference in the way we choose to live our lives – no matter what our circumstances.