Hair loss and thinning hair are common problems in both men and women. We’ve known for some time that male pattern baldness is largely due to genetics and a hormonal process that typically accompanies aging. But, the American Academy of Dermatology estimates that approximately 30 million women in the USA are also dealing with some form of alopecia.

Currently, there are several conventional options for dealing with hair loss in both sexes. The choices range from over-the-counter topical treatments such as Minoxidil (Rogaine) to prescription medications like Finasteride (Propecia) and in some instances, surgical options and hair transplantation. 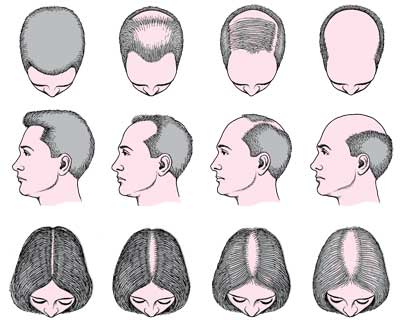 There’s some emerging research that points to natural alternatives for addressing poor hair quality as well. Many of these holistic options only have preliminary evidence to support their use. But, they do offer hope for those who have not found success with conventional therapies or who have discontinued their use due to side effects or other complications.

Before I list some of the most promising alternatives, I want to emphasize that it’s vital to have a complete medical work-up if you’re experiencing unexpected hair loss. By that I mean loss that occurs suddenly or that doesn’t appear to be related to any recent hormonal change, new medication, physical or psychological trauma, dramatic weight loss or genetic predisposition.

A skilled physician can also help determine whether thinning or loss is due to a nutritional deficiency such as a lack of iron, protein or zinc. They will likely test thyroid function and review any medications being taken. A detailed hormonal panel may also be ordered to rule out any shift that may be contributing to the declining health of the hair follicles. There are even certain infections and autoimmune conditions, such alopecia areata, which cause hair to fall out in circular patches. If all tests come back as normal and you’re looking for a natural approach, here are some options that may be worth considering:

In addition to these alternatives, I would also mirror the advice given by Dr. Andrew Weil. He suggests supplementing with healthy fats such as fish oil and GLA, which can be found in black currant seed oil, borage oil, evening primrose oil and hemp oil. (20) I also recommend following a diet that is rich in antioxidants and anti-inflammatory foods, low in sugar and adequate in protein. If you’re trying to lose weight, make sure to do so in slow and steady manner. Select nutrient dense, whole foods that provide vital minerals and vitamins as you shed the excess weight. It’s almost always a good idea to also take a high potency multivitamin/mineral to provide added insurance against common deficiencies.

In terms of topical products, try to use the mildest, most natural hair care products available. Avoid products with harsh cleansing agents, artificial colors, preservatives and synthetic perfumes. You can even invest in a chlorine filter for your shower. Chlorine is a powerful antiseptic, but can dry and irritate the hair, scalp and skin. The general idea is to avoid anything that dries out or inflames the follicles and promotes hair breakage.

Hair loss and thinning should be approached in the same way that we address all other health issues. Firstly, try to identify the true cause of the problem. Secondly, start by working from the inside-out. You can always add an outside-in strategy to complement later. Finally, utilize the safest and most natural options whenever possible. Aggressive, conventional therapies may be necessary, but they shouldn’t always be the first choice. By following these basic steps you may be able to improve the actual health of your hair and more importantly, the overall condition of your health.