At some point in of our lives, we’ll all be wounded in one way or another. It could be something minor, like a sprained ankle or something as serious as spinal cord injury. Even the after effects of elective surgery should be considered in any thorough discussion about wound recovery. But there is an aspect of healing that is rarely discussed in modern medicine – the role that one’s mental state and nutrition play in physical recovery. 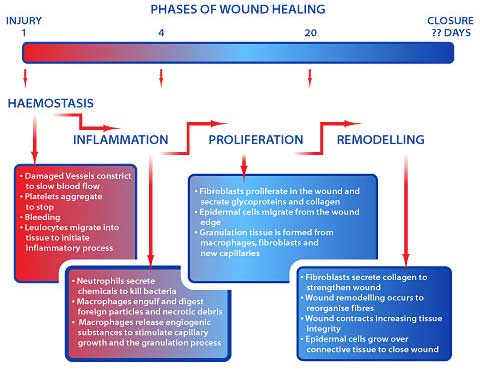 A new study conducted at Massachusetts General Hospital’s Institute for Mind Body Medicine provides powerful evidence that the recovery environment can play a crucial role in the ability to heal wounds.

The experiment was conducted on young rats who were in the process of healing from a burn injury. They were split up into three distinct groups: a) one group of rats was kept in individual, isolated cages; b) the second group was placed in isolated cages, but were also given pieces of cotton from which they could build bedding; and c) the final group was placed in shared cages with other recovering rats.

After four weeks, 92% of the rats in the shared cages had healed from their injury. Only 12% of the isolated rats recovered well. But the most surprising finding was the the isolated rats who were given the nesting material (cotton squares) exhibited a recovery-rate of 64%.

The researchers theorized that the reason for the enhanced healing in the isolated “nesting” rats was due to an increase in oxytocin production. Oxytocin is a hormone that is associated with affection and bonding. In order to test that hypothesis, they conducted another trial in which oxytocin was administered to a group of rats. The results closely approximated the healing course that was shown in the rats who built nests out of cotton.

Further testing demonstrated a reduction in hyperactive behavior in the isolated, nesting rats. When their brains were analyzed, a change in genetic expression was found in the hippocampus region. This is an area that plays a major role in managing the effects of stress. This is of utmost importance because increased stress has been implicated in cases of poor wound recovery.

Dr. Gregory Fricchione, the lead author of this pioneering research, concluded that, “giving these animals a behavioral intervention changed not only their behavior, but also their physical health, raising important mind-body questions that requires further investigation in humans as well as animal models.” (1)

Optimal nutrition can also play a role in recovery from physical trauma. In recent years, many reports have been published that highlight the potential of various micro and macro nutrients in assisting the body and mind during a healing crisis. Here are a few examples:

If you’re recovering from any type of wound, please inquire with your preferred health professional about what you can do to support your healing process. Consider all of the possible alternatives. If diet and supplementation isn’t an option, then consider a mind-body technique such as aroma or color therapy, guided imagery, hyperbaric oxygen treatment, hypnosis, massage or meditation. The important thing is that you be proactive about it. Be a part of your recovery process and you’ll likely heal faster and more completely.