One the benefits of watching a film on Cable TV is that if it’s horrible, you haven’t wasted any money or too much time and can always change the channel. That was my initial thought when watching the first couple of minutes of The Hammer. Luckily, I’m not a very impulsive film viewer. In fact, I’ve been known to watch even the worst films all the way to the bitter end just to see if they somehow manage to redeem themselves. 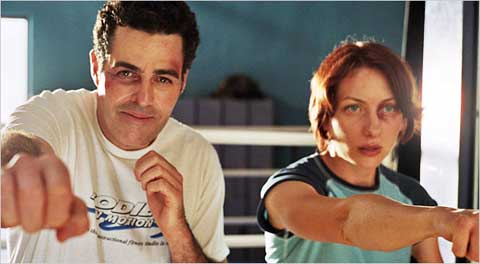 Radio show host and comedian Adam Carolla plays Jerry “The Hammer” Ferro in this low budget comedy. Ferro is an underachieving construction worker who’s just turned 40. In his spare time, he teaches a boxing class at a local gym, the final remnant of his short-lived glorious past as an up and coming professional boxer.

One day while working on a housing project, Jerry and his best friend and co-worker, Ozzie, are viciously berated by their overbearing boss. This is a pattern that has obviously been going for many years. But on this day, on Jerry’s 40th birthday, such indignities will not stand. In a matter of moments, an electric sander goes flying through the window of the boss’ truck and, in return the boss swings a pick ax into the door of Jerry’s old clunker!

The body blows don’t stop there. The news of his job loss does not sit well with Ferro’s long-suffering girlfriend. With a birthday banner still hanging in their apartment, she tosses him out on the street. Or, more specifically, onto Ozzie’s doorstep.

But every boxer knows not to stay down for the count if there’s even an ounce of fight left in him. It’s at this point that a US Olympic Boxing Team scout happens upon Jerry working out at a local gym. In a seemingly miraculous stroke of luck, the recruiter offers Jerry an opportunity to try out for the regional qualifiers that could possibly land him a spot on the US Olympic Boxing Team.

Sure this is hard to believe. But I suggest you go with it, as I did. I promise you that the film will not stretch credulity beyond the breaking point. Just think of it as a sort of modern take on Rocky with a whole lot more laughs. Besides, I think you won’t be able to resist the consistently clever dialog coming out of Carolla’s mouth. In one scene where he’s instructing a boxing pupil, he explains how to deliver a punch in this way, “Look at your fist as a package and look at your thigh as the UPS truck. Don’t hit ’em with your arm. Hit ’em with your thigh and a**.”

One of the other irresistible aspects of the film is that is decidedly not politically correct. People communicate freely in this film without feelings being hurt or high drama. There’s the sense that these characters are truly speaking their minds and not worrying about others judging them for it. They all have their own flaws and prejudices, but I liked them all the more for it. They seemed like real people, talking in a real-life way – just a lot funnier.

There are a couple of revelations in The Hammer. The first is the endearing and hilarious performance by Oswaldo Castillo (“Ozzie”), as Jerry’s Nicaraguan construction partner and constant companion. He’s actually one of Adam’s good friends in the real world. In fact, this story was apparently inspired by true life events in Carolla and Castillo’s own lives. Speaking of Carolla, he’s surprisingly effective in the title role. He’s crude to be sure, but also authentically heartwarming. It’s impossible not to root for him in his attempt to change his slacker ways.

There’s also a really sweet love story involving a public defender, played by Heather Juergensen (of “Kissing Jessica Stein” fame), who participates in Carolla’s boxing class. Verbal sparks fly when these two try to hit it off. I smiled a lot as I watched their awkward courtship progress and simply hoped for the best for them.

You don’t need to be a boxing enthusiast or an Adam Carolla fan to like this comedy. The Hammer is just a small, independent picture that’s not much to look at. It doesn’t aim for epic heights or any form of greatness, but it hits it’s own definition of a bullseye. It succeeds because it’s got a heart of Golden Gloves and a very clever script to keep it’s head well above the mat. If you’re looking for a sweet, laugh-out-loud, romantic comedy that runs just shy of 90 minutes, this is an excellent choice.

The Hammer is Rated R for some crude language and boxing violence. I personally believe that a PG-13 rating would have been better suited for the content on display in this laugh fest. I think it’s perfectly fine viewing for older children and above. The Hammer is currently screening on late night Cable TV and available for rental at a video story near you.