Artichoke Leaf for IBS and Indigestion

The trouble I have with most medications is that their primary purpose is not to promote healing, but rather to mask troublesome symptoms. They generally don’t address the cause of the problem and, frequently, they result in unintended adverse effects. But, to be fair, sometimes even the finest holistic physicians simply cannot pinpoint the root cause of an illness. In those instances, alternative health practitioners often resort to the use of natural medicines. This is often a more attractive option because alternative remedies are generally safer and sometimes provide considerable “side benefits”. 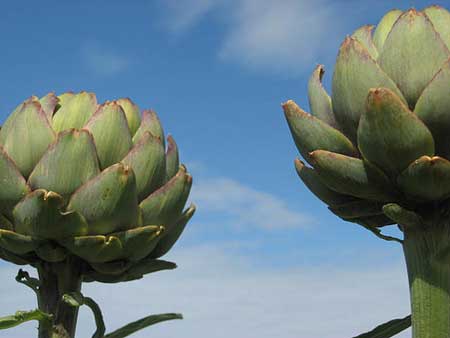 Dyspepsia is essentially a medical term for “indigestion”. It’s a very common condition that includes symptoms such as abdominal pain, bloating, gas, inappropriate fullness at meals and nausea. Most of these discomforts occur during or shortly after eating. The degree by which someone suffers from dyspepsic symptoms varies widely. For some, it’s only an occasional annoyance. In others, it’s the more severe incarnation of a condition known as IBS (irritable bowel syndrome).

Artichoke leaf extract (ALE) may offer a viable alternative to conventional medications for those with dyspepsia and IBS. The evidence is clearly documented in the scientific literature of the past few decades. In addition, it appears that ALE frequently provokes other positive effects while improving digestive function, namely improved cholesterol levels and liver protection.

A study published in September 2008 found that ALE reduced cholesterol levels in a group of 75 participants with mild to moderately high cholesterol. The dosage used in this study was double the normal dose, 1,280 mg. A modest reduction in total cholesterol was found (4.2%). The authors speculate that the reduction might have been greater in those with higher cholesterol readings. (7) This theory is supported by at least two previous studies that observed a more significant cholesterol lowering effect (up to 23%) in those drinking juice made of artichoke leaves or taking ALE tablets. An improvement in endothelial function was also noted in the artichoke juice experiment. (8,9) In addition, several laboratory experiments offer mechanisms by which ALE could potentially lower cholesterol and triglyceride levels in a safer manner than conventionally prescribed medications. (10,11,12,13)

It’s also reassuring to know that ALE consistently demonstrates protection against hepatotoxicity (liver damage) in various laboratory experiments. One of the greatest concerns about cholesterol lowering medications is the possibility of severe liver complications. It appears that a broad spectrum of antioxidants may be responsible for ALE’s ability to shield the liver. When scientists attempted to isolate individual components of ALE to see if they would similarly protect liver health, they failed to successfully do so. In this instance and in many others, the whole is much greater than the sum of its parts. (14,15,16)

Artichoke leaf extract isn’t one of the most popular supplements on the market. That’s part of the reason why I wanted to share this information today. Digestive dysfunction is very prevalent today, and I’m all for attempting to address its root cause. But if you’re unable to find a reason for it, perhaps you should consider ALE before resorting to the battery of over-the-counter and prescriptive medications on the market.


18 Comments & Updates to “Artichoke Leaf for IBS and Indigestion”