It’s late at night and I’m driving home after a decidedly rough evening. I’m feeling kind of down and all I see is an endless parade of fast food restaurants with convenient drive-thrus beckoning. A thick, cold and creamy milk shake sounds just like the ticket. Maybe some of you out there can relate? I know all too well that a pit stop to “soothe” the pain with some junk food would, ultimately, only make a bad night worse. So instead, I decide to stick to the resolve that’s helped me to lose over 80 pounds in the past several months. Then a thought occurred to me. Why not try sticking to my diet while still having some comfort food? So I that’s what I did. 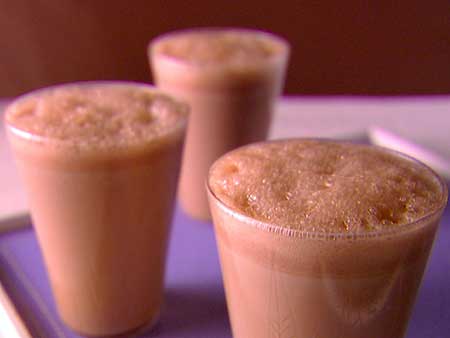 The idea of taking an unhealthy, guilty pleasure and transforming it in something that’s equally satisfying, but genuinely nutritious is a hobby of mine. I put that interest into play here. The reason I mention it is two-fold: 1) This can be a valuable strategy that can be incorporated into any diet plan; and 2) Several studies published in the past year indicate that using nutritious milk shakes (“meal replacements”) can help promote and sustain weight loss and wellness.

On June 17th, a trial was featured in the European Journal of Clinical Nutrition. It focused on a comparison between two strategies for maintaining long term weight loss. This is a very big issue in the arena of weight management. So called “yo-yo dieting” (repeatedly losing and gaining weight) is known to put individuals at greater risk for numerous health conditions and increased mortality. (1,2) Yo-yoing can be a vicious cycle.

This particular examination followed 62 volunteers who had achieved at least 5% weight loss via diet over a period of 6 months. The group was then split into two. One section received a once-daily (liquid) meal replacement in addition to a low calorie diet. The remainder of the participants followed a low calorie diet exclusively. All of the volunteers were monitored for a total of 6 months. (3)

These results prompted the authors of the study to conclude that, “Substitution of a low-calorie diet formula for a meal is an effective measure for weight loss maintenance compared with dieting alone.”

Other recent studies have found similar success with meal replacements, but have also added additional information to the overall picture. A study from February 2009 determined that a high protein shake is more effective at lowering body fat than a “nutritionally balanced conventional” shake. (4) A 2008 study in the Nutrition Journal confirmed these findings and also noted that higher protein meal replacements appear to lower LDL (“bad”) and total cholesterol levels as compared to “standard protein” shakes. (5)

Those who used meal replacements most often lost the greatest amount of weight.

These results also hold true when tests are conducted in subsets of the population, such as those with type 2 diabetics. The use of meal replacement products in this group demonstrates greater weight loss, as well as a reduction in cellular damage (known as AGEs – advanced glycation end products) that may result from both blood sugar abnormalities and excess weight. AGEs are thought to contribute significantly to cardiovascular disease, diabetes, inflammation and the aging process in general. (6,7)

At this point, you may already be considering adding meal replacements to your regular dietary program. But before you do, just know this: You can make much healthier versions of meal replacements at home. That’s what I do and that’s what I typically recommend. It takes only a small amount of effort and the benefits are greater than anything you can expect to find in a bottle, can or smoothie shop. Here’s an example of a luscious, delicious and nutritious meal replacement that I make on a daily basis.

* Or try a tbsp. of organic peanut butter instead.

Combine all of the ingredients in a blender and process until creamy, smooth and thick. You can also use an immersion blender to make this treat. If you’d prefer the consistency of an ice cream or pudding, simply add a little more coconut milk/cream and/or flax seeds and/or blend a bit longer.

This meal replacement is loaded with antioxidants, fiber, healthy fats, nutrients and protein. It truly replaces the most important aspects of a healthy, whole food meal while at the same time helping to hydrate you. Best of all, the taste is as deceptively decadent as anything I could find at Baskin-Robbins, Ben & Jerry’s or Starbucks! If you try this recipe out, I hope you’ll enjoy it as much as I do.