Ginseng in the News

Last week I presented a case for North American ginseng (Panax quinquefolium) as a natural way to manage the common cold and flu. In the second part of my 2 part column on ginseng, I’ll focus primarily on another member of the Panax family known as red ginseng (Panax ginseng C.A. Meyer). Red ginseng is typically grown in China or Korea, and is marked by a six year growth cycle. In pre-scientific times, it was considered a virtual panacea, but its reputation has cooled considerably in the 20th and 21th centuries. In my own recent review of the medical literature, I’ve discovered what seems to be a renewed interest in the scientific study of ginseng. There were literally thousands of clinical and laboratory experiments to choose from. I’ve selected three specific health issues to illustrate the breadth and power of this comeback root. 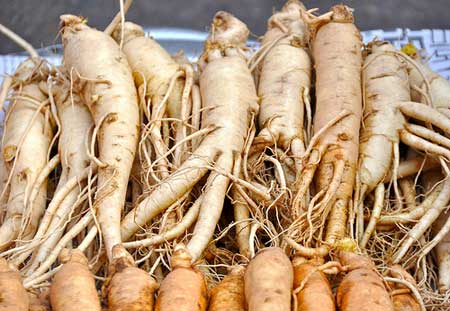 The sunny days of summer are now upon us. This is a great opportunity to derive more of the health promoting benefits from smart sun exposure. But all too often we find ourselves in circumstances that lead to something quite different and decidedly unhealthy – a sunburn. This kind of damage not only contributes to premature aging, but also predisposes us to skin cancer.

One of the more intriguing aspects of modern ginseng research is its emerging role as a photoprotective agent. A study published today in the Journal Ethnopharmacology tested the effects of a Korean red ginseng extract in a group of hairless mice. These mice have a very similar dermal model to that of human skin. The mice in the study were all exposed to UVB radiation, but only half received a daily ginseng infusion in their water supply. The researchers conducting the study recorded several blood and visual markers of skin aging prior to and after the UVB and ginseng exposure. Here’s a description of the results:

This is important not just for the external implications, but also because collagen is present throughout the body in blood vessels, bones, cartilage, eyes, ligaments, tendons and more. The collagen sparing effect noted here may eventually afford benefits in other seemingly disparate body systems. (1)

In January 2009, another experiment determined that the topical application of components of red ginseng (ginsenoside Rb1 and saponins) prevented UVB related loss of elasticity, thickening of the skin and wrinkle formation in the same variety of hairless mice. Interestingly enough, applying ginseng directly to the skin appears to increase collagen production. This hints at a synergistic effect of taking ginseng orally and applying it topically. (2)

Perhaps even more importantly, the topical application of ginseng extract has also demonstrated an ability to prevent cellular changes that can ultimately lead to skin cancer. A 22 week study in an animal model found that red ginseng “delayed tumor onset significantly”. The authors went on to say that, “red ginseng was also effective in reducing the UV radiation-induced skin tumors and reduced the number of tumors per mouse”. (3) These findings are corroborated by at least two additional trials, one of which even suggests a quicker “burn wound healing” effect due to the application of red ginseng extract. (4,5)

In Chinese, the word used to describe ginseng is rénshēn, whose literal translation is “man root”. The primary reason has to do with the shape of the Panax roots, which look like a pair of male legs. But the Chinese translation also seems apt thanks to ginseng’s historical reputation as a virility aid for older men. That long held belief now has some pretty compelling evidence to support it.

A new study in the Asian Journal of Andrology (the male equivalent of ‘gynecology’) tested the effects of a ginseng extract on 143 volunteers with erectile dysfunction (ED). The 8 week trial involved the use of a twice-daily 1,000 mg ginseng extract or placebo. The efficacy of the respective treatments were based upon a standardized questionnaire (the International Index of Erectile Function). Five measures of physical function and overall satisfaction were “significantly higher in the ginseng group than in the placebo group”. (6)

Several other trials spanning from the mid-1990s to the present have consistently found positive results with regard to red ginseng and male sexual performance. Here are some of the highlights of that research:

There Are Significant Differences Between Ginseng Berry and Root

The third and final stop on our ginseng tour directs us to the connection between Panax ginseng supplementation and improvements in age-related cognitive function. When I think of the aging brain and herbal medicine, Ginkgo biloba often comes to mind. But it seems that red ginseng also deserves some serious consideration in this area of health care.

The August 2008 issue of the European Journal of Neurology presents a 12 week study involving 61 men and women with diagnosed Alzheimer’s Disease. The group was split into three: Group A received 4,500 mg of Korean red ginseng (KRG); Group B took 9,000 mg of KRG daily; and Group C received an inactive placebo. To measure any changes in memory and overall mental performance, a scale called “The Alzheimer’s Disease Assessment Scale (ADAS)” was employed. Both KRG groups demonstrated cognitive improvements as compared to the placebo group. But the higher dosage patients (9,000 mg a day) exhibited the greatest benefits. (14) A similar study, also from 2008, used 4,500 mg of KRG and found positive results that faded soon after the discontinuation of the herbal therapy. (15) Earlier research suggests that these are not isolated test results and may apply to other less severe forms of cognitive impairment as well. (16)

Laboratory studies are beginning to clarify how red ginseng may be supporting healthy brain function. For instance, an experiment that will be published in August explains how red ginseng helps to promote changes in the hippocampal region of the brains of old mice that helps them more closely resemble the brains of younger mice. (17) Other studies theorize that ginseng can help prevent oxidative damage to the brain (via antioxidant activity) which, over time, may protect against permanent cerebral harm and dysfunction. (18) Finally, a March 2009 study found that a component of red ginseng could possibly help to prevent beta-amyloid plaques in a laboratory (in vitro) study. This type of build-up is widely thought to contribute to the progression of Alzheimer’s Disease. (19)

Please keep in mind that this information is based on research relating to red ginseng root. There are also commercially available supplements that use extracts from red ginseng berries. These too have medicinal properties, but, so far, they’ve mostly been studied in relation to their effect on blood sugar imbalance and weight loss. (20,21,22)


10 Comments & Updates to “Ginseng in the News”