The Truth About Coconut Water

Whenever I visit a local health food store, I make it a point to walk down all of the aisles and scan for products that are new or beginning to take flight. Yesterday I stopped at the refrigerated beverage section and noticed quite a few coconut based drinks. I recently became interested in coconuts mainly because of my experimentation with their fiber (coconut flour) and the unique oil contained in the flesh of these tropical fruits. However, the milky liquid found inside Cocos nucifera is the one part that I hadn’t yet tried. 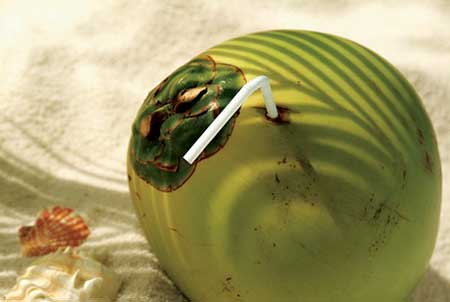 The first question that popped into my mind was whether coconut water is just another character in the seemingly neverending parade of trendy foods and supplements. From my perspective, the determining factor would be found in the medical literature. Here’s a collection of material that I discovered while researching the merit and utility of this line of products.

Health benefits aside, one the most promising applications for this tropical beverage is as a premium mode of re-hydration. Many studies attest to this fact, including one from 2007 that found that coconut water may be superior to standard “sports drinks” for post exercise hydration. (9,10,11) Some doctors go so far as to recommend this nutritional liquid in cases of diarrhea or other situations were re-hydration is a medical necessity. (12) But there are a few caveats worth noting. Caution should be used in people with: a) poor kidney function; and b) those who require higher glucose and sodium content as part of the re-hydration process. (13) The relatively low levels of sodium and sugar in coconut water are generally considered positive attributes, but may not be ideal in all circumstances.

Based on what I’ve learned, I think coconut water can play a meaningful role in some health routines. The choice about whether or not to use it regularly should depend on your individual circumstance. Personally, I wouldn’t hesitate to try it instead of a conventional sports drink. Or, if I needed some additional potassium, which many people lack, I’d certainly prefer drinking a can of coconut water to eating a high-carb baked potato. In my opinion, the real value of coconut water is that it offers yet another nutritious and tasty alternative to support various aspects of good health.


61 Comments & Updates to “The Truth About Coconut Water”