One of the greatest challenges to maintaining a healthy lifestyle is finding practical ways to properly nourish ourselves while “on the go”. An occasional indulgence in an unhealthy meal or snack isn’t the end of the world. But too often, that lapse is enough to throw off overall momentum for longer periods of time. This is a real concern for those who are trying to manage chronic health conditions or who have embarked on weight loss programs. Today I’ll review one of my favorite snacks, which not only helps support good health, but allows me to stay on plan even during the busiest of times.

Pumpkin seeds are a fantastic snack food that I always keep on hand. They’re an excellent source of antioxidants, fat, fiber, minerals and protein. But as you’ll see, they’re also an abundant reservoir of lesser known nutrients and phytochemicals (plant chemicals) that can positively impact many aspects of wellness. In addition, Cucurbita seeds can be very tasty and versatile depending on how they are seasoned. Best of all, this is the rare snack that can healthfully satisfy the most ravenous appetite and craving for something crunchy and salty.

When you look at the macro-nutrient makeup of pumpkin seeds you’ll notice that a 2 oz serving provides a respectable 10 grams of protein, 5 grams of fiber, 16 grams of heart healthy fats and an enviable potassium to sodium ratio (270 mg of potassium, 75 mg of sodium). These are the figures for a product by Eden Organic that I heartily recommend called Spicy Pumpkin Dry Roasted Seeds. The primary ingredient is organic dry roasted pumpkin seeds, but also includes some organic tamari soy sauce (wheat-free), organic garlic and organic cayenne pepper. Not only is it absolutely delicious, but the ingredients read like a “who’s who” in the field of nutritional support for cardiovascular health.

What are some of the micro-nutrients that make pumpkin seeds such a smart snack selection? For starters, they are one of the richest natural sources of magnesium and zinc. (1) Both of these minerals are commonly deficient in the average diet and play integral roles in curbing feelings of anxiety, supporting bone health, reducing musculoskeletal pain and promoting proper immune function. Beyond that, these low-carb treats also contain a significant amount of Vitamin K, which modern science is now proving to be essential for healthy arteries, bone integrity and, possibly, even protection against certain forms of cancer. (2,3,4,5,6,7,8,9,10)

While pouring through the medical literature, I discovered some rather unique qualities attributable to pumpkin seeds that appear to place them in a class of their own. Here’s a brief overview of some lesser known benefits: 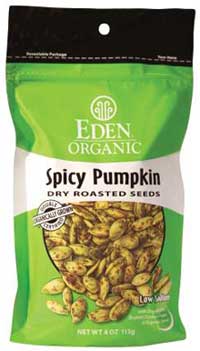 This is just a portion of what is currently known about pumpkin seeds. But, I have the feeling that much more will come to light in the near future. For instance, recent scientific exploration has discovered several new antioxidants contained in Cucurbita seeds. What else might be found in this humble snack food? Only time will tell, but I know I’m already enjoying many of the benefits. (34,35)