If you want to stick to a healthy diet over the long term, it helps to find ways to keep it interesting. Eating the same old things over and over again isn’t just boring to your taste buds, but it also severely limits the types of nutrients that your body has to work with. Fortunately, the variety of food available in the 21st century is greater than at any other time in human history. No matter what kind of diet you’ve adopted, you can hunt down exotic and rare menu items that were previously unavailable. Today, I’d like to introduce you to two “new” snack items from South America. 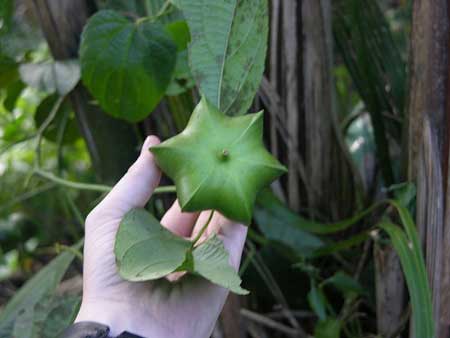 While pushing my cart down the aisle at my local health food store, an unusual product caught my eye – something called Sacha Inchi. I stopped and examined the package and notice that the contents look a lot like flat, compact almonds. The label promotes a high omega-3 fat content. I’m intrigued because omega-3s are the type of fat most commonly found in fish, flaxseeds, hempseeds and perilla seeds.

It turns out that Sacha Inchi (SI), also known as the Inca peanut, is a plant that produces star-shaped green fruits which yield edible seeds. The leaves of the plant, the seeds and their oil have been consumed for thousands of years by Indians living in the Peruvian Amazon and in surrounding areas. Because the seeds are a rich source of digestible protein (approximately 25-30%) and fat (up to 60%), they have been traditionally used to spur the growth of young children and keep senior tribe members in robust health. (1,2) There hasn’t been much modern scientific study on SI, but what little has been published appears promising, especially with regard to cardiovascular health. (3)

In researching this ancient food source, I found it interesting that the seeds are a particularly abundant source of tryptophan, an amino acid that can help promote a positive mood. (4) The large percentage of omega-3 fatty acids (about 50%) also bodes well for supporting psychological wellness. One of the key criteria to finding an optimal snack is how that food makes you feel. It appears that Sacha Inchi seeds would do quite well in this department.

Another positive characteristic about SI seeds is that they’re high in fat (14 grams per ounce), rich in protein (9 grams per ounce) and loaded with fiber (6 grams per ounce). This is like a natural prescription for fast and efficient appetite relief. Nothing promotes stable blood sugar levels and hunger satisfaction better than foods that are rich in these three macro nutrients.

It’s hard to describe the taste of these seeds. They don’t quite resemble almonds or peanuts, but they certainly taste pleasantly “nutty” and have a crunchy texture. I found that a bit of these go a long way – also a big plus in a snack item for anyone who needs to mind their weight.

Cost may be the only downside of SI that I’m aware of. The price is higher than more conventional snack options, perhaps because they’re imported and relatively new to the market. I paid about $7 for a three ounce bag. That fact alone will prevent me from eating these seeds regularly, but I would definitely consider them as an occasional treat or serve them as a conversation piece at a dinner party.

Further down the isle, another product caught my attention. The box read, “Heirloom Ecuadorian Raw Cacao Beans”. I looked into the little window in the center of the box and noticed, once again, a nut-like item that resembled an almond. It turns out that these are the beans contained within the cacao pods that are typically roasted and ground into cocoa powder. But in this case, they hadn’t been cooked or processed in any manner. There were no added ingredients, not even sugar. This really piqued my interest.

I’ve reported several times about the many benefits of cocoa. Of course whenever I’ve used cocoa, it’s always been in the context of a dessert or an otherwise sweet treat. But this product was boldly placed next to chips and crackers, nuts and protein bars. Could it be that it was meant to be eaten just like a bowls of tortilla chips or macadamia nuts? I had the sinking feeling that I’d get some rather odd looks if I stopped one of the health food store employees and asked that question. So, for the purpose of gastronomical exploration, I decided to buy these peculiar beans and conduct my own taste test. 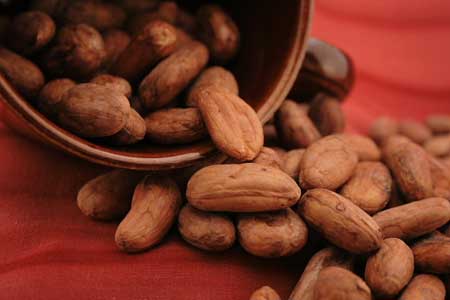 Let me start by telling you this: I didn’t dislike them. They’re bitter and obviously have a chocolate taste. But they also have an “earthy” quality to them. It’s not a bad thing. It’s kind of like the difference between eating roasted almonds and fresh, raw almonds. I ate the cacao beans along side the Sacha Inchi seeds – kind of like a South American trail mix. In fact, while eating this combination, it occurred to me that some unsweetened shredded coconut would have made an excellent addition to these Amazonian supersnacks.

As far as nutrition goes, these beans are really quite impressive. First of all, the fact that they’re not processed allows for a greater retention of the natural antioxidants. (5) In addition, much like Sacha Inchi, these beans have a potent hunger-suppressing properties: 13 grams of fat, 6 grams of fiber and 4 grams of protein (per ounce). Each ounce serving also provides a significant amount of iron, magnesium and vitamin C.

The other similarity that cacao beans share with Sacha Inchi is that they also appear to support mental health. Several studies in the past few years indicate that chocolate extracts may improve anxiety, depression and low-energy levels. (6,7) Any snack that can give you a mental and physical boost while helping to nourish your body and satisfy your hunger is a winner in my book.

The price for the raw, organic cacao beans was about $10 for an 8 ounce serving. I probably ate about 1-2 ounces as my afternoon snack. I had no desire to eat more, which is an excellent sign. I think the nutrient density and pungent taste naturally prevented me from overindulging.

I can honestly say that I did feel really good after eating these Amazonian snacks. The taste wasn’t spectacular, but it was interesting. I mean that in a good way. My taste buds were energized, my brain was content and my body felt rejuvenated and ready to write this column.