One of my primary goals for this site is to provide practical and topical information that can be incorporated into daily life. The following research has all been published within the past seven months. 2009 may ultimately be considered the “year of the nut” thanks to the extensive coverage that science is devoting to this humble snack food. By looking at the current batch of studies and data collected over the last few decades, it’s become abundantly clear that regular nut consumption can help address some of the biggest health crises facing our society, namely diabetes, heart disease and obesity. The best news of all is that every one of us can easily adjust our diets to derive all of the benefits that nuts have to offer. 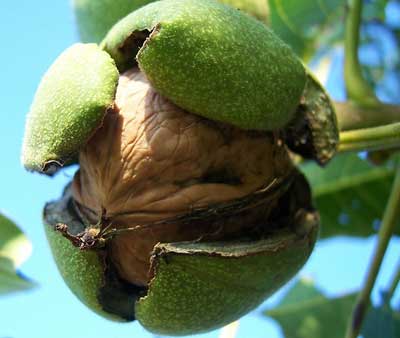 For starters I’d like to review a few articles that summarize some of the key benefits of nut consumption in a real world setting. The primary source of information used in this type of analysis is derived from studying the eating patterns and disease prevalence of large segments of the community. The purpose for doing so is to try to discover patterns that can possibly be applied to the population as a whole. Two scientific papers focusing on the health effects of nuts appeared in the May 2009 issue of the American Journal of Clinical Nutrition. (1,2) This is a brief summary of the conclusions:

Walnuts are often the recipients of scientific attention because, unlike other nuts, they’re a relatively rich source of omega-3 fatty acids. Fish is generally a heart healthy food, largely because it also contains high amounts of similar types of fat. Recently, a study compared the effects of diets containing either fish or walnuts in a group of volunteers with mild hyperlipidemia (high cholesterol and triglycerides). In this experiment, the participants were fed three different diets during separate 4 week periods. All the diets contained approximately 30% total fat and less than 10% saturated fat:

Blood tests were performed at the beginning and end of each diet. The results revealed that the walnut diet lowered LDL “bad” cholesterol more effectively than the fish. But the fish diet reduced triglycerides and raised HDL “good” cholesterol to a greater extent than the walnut diet. (3) These results are consistent with a just published meta-analysis of the “effects of walnut consumption on blood lipids”. That review of 13 studies also found lower LDL levels but no significant alterations in HDL cholesterol or triglycerides. (4) Part of the reason for this could be that fish contains two specific omega-3 fats, known as DHA and EPA, which are not present in nuts or other plant based foods. Based on these results, it would seem prudent to include both types of food as a regular part of the diet.

Nuts have recently been promoted as a type of food that may protect against heart dysfunction relating to metabolic syndrome (see image below). (5) They have also been singled out, along with vegetable intake and a Mediterranean style diet, in a comprehensive summary of foods that are linked to cardiovascular protection. (6) One of the more interesting studies of late looked at the dietary patterns of a group of over 237,000 physicians. That targeted population study found that doctors that ate the largest amounts of nuts had the lowest risk of hypertension (high blood pressure). (7) Another trial found that both almonds and walnuts increased the antioxidant activity in a group of healthy volunteers and helped protect against “lipid peroxidation”, which is believed to contribute to the progression of cardiovascular disease. (8)

Heart disease is one of the greatest health risks in the population at large, but it is an even greater threat to those with type 2 diabetes. The July 2009 edition of the Journal of Nutrition examined the impact of nut intake in a group of 6,300 women with type 2 diabetes. The analysis was based on 22 years of food frequency questionnaires and the relative incidence of coronary heart disease (CHD). The results demonstrated that women who ate at least 5 weekly servings of nuts and/or peanut butter were about 44% less likely to be diagnosed with CHD. A serving was classified as 1 ounce of nuts and/or 1 tablespoon of peanut butter. (9) Another benefit that nuts provide is that they appear to improve insulin sensitivity. (10) Proper blood sugar management is an important factor in the prevention of cardiovascular complications in diabetics.

Finally, I’d like to dispel a common notion about nuts and weight gain. It’s true that nuts and seeds are calorically dense. I can’t deny that they’re also high in fat. But what I can tell you is that science simply does not support the theory that eating nuts promotes weight gain. In fact, the exact opposite is true – provided that a little common sense is factored into the equation.

In June, a trial was published that looked for a connection between nut intake and weight fluctuations. Almost 52,000 women (20-45 years of age) were followed from 1991 to 1999. The bad news is that, on average, most of the women gained weight. The good news is that those eating 2 or more servings of nuts (peanuts or tree nuts) per week gained less weight. The authors of the research also noted that the frequent nut eaters were less likely to be classified as being obese. The concluding remarks read as follows, “The results of this study suggest that incorporating nuts into diets does not lead to greater weight gain and may help control weight”. (11)

Furthermore, a Scandinavian study discovered that snacking on an equal amount of calories from peanuts instead of candy resulted in some very different outcomes. A group of 11 men and 14 women demonstrated that eating a set amount of peanuts for 14 days did not lead to significant weight gain or increase in waist circumference, but eating the same amount of calories from candy did. In addition, cardiovascular markers worsened in those eating the candy snacks. Another difference found was that those eating peanuts exhibited an improvement in their metabolic rate – they burned more calories! (12) Perhaps this is why experts in England are recommending the replacement of one “unhealthy snack” with nuts in order to drastically reduce the incidence of “cardiovascular deaths” in the UK. (13)

You may be wondering if there is any downside to eating nuts. Provided that you’re not allergic to them and that you eat them in moderation, I can’t think of a reason not to include in your diet. The evidence of a positive connection between the consumption of nuts and the likelihood of a healthier life is pretty overwhelming. So make it a point to replace some unhealthier foods with a handful of nuts that may help you to maintain or reclaim your wellness.