Salvia hispanica isn’t exactly a household name. But when it’s referred to as “chia seeds”, the recognition factor increases substantially. In prior decades, that coupling of words would bring to mind a novelty item that would grow into a Chia Pet. However these days, Salvia hispanica is more likely to be mentioned at your local health food store. It turns out that the seeds of chia are noteworthy for being more than just a gag gift. 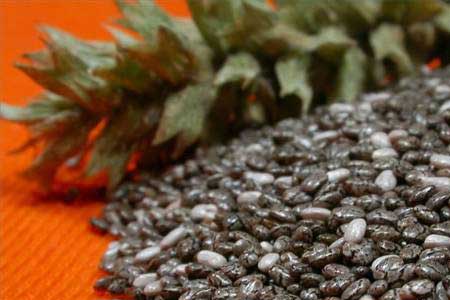 This member of the mint family has been used as a vital form of sustenance in Central and South American cultures for several thousand years. But there has been worldwide resurgence in interest in these seeds which are rich in potent antioxidants, generous amounts of fiber and health promoting omega-3 fatty acids. (1)

You may have noticed a recent pattern in the natural health marketplace. Every so often, a relatively obscure and ancient food is hoisted into the media spotlight and presented as a miracle worker. This happens so often that many consumers tend to become jaded and skeptical about the acclaim assigned to this parade of “new” products. I can understand both the excitement and the reluctance to embrace these types of supplements. The key is to get beyond the initial gut reaction, look past the promotional literature and dig into the actual research that’s available. Or I could do that for you!

Investigating a nutritional supplement is much like the process employed by private detectives. You first have to find all the available evidence possible. But that’s the just the beginning because, in all likelihood, you’ll discover conflicting information and sources of data with varying degrees of reliability. The true merit of a food or supplement can only be determined if all the relevant factors are considered.

A study from June 2009 put the good reputation of the chia seed into question. 90 overweight men and women took part in a 12 week study to determine if Salvia hispanica could help promote weight loss and improve cardiovascular health. Half of the group received a 25 gram serving of chia seeds before breakfast and dinner. The remaining participants consumed a placebo in the same fashion. Body composition/weight, blood pressure and a variety of blood tests focusing on inflammation and lipoproteins (cholesterol and triglycerides) were conducted prior to and post study. (2)

This is disappointing because antioxidant-rich foods that are high in soluble fiber and omega-3 fats are generally believed to help reduce cardiovascular risk factors, inflammation and support weight loss. In addition, a few prior studies suggested that chia supplementation could reliably bring about such positive results. So what happened here? We might find a plausible reason for these current and unexpected findings by looking at the previous research.

A scientific trial completed in 2009 examined the effect of chia seeds on appetite and blood sugar levels. That research assessed the impact of adding various amounts of chia to refined (“white”) bread or rice milk. The amount of chia used per test serving ranged from 7 grams to 24 grams. The authors of this study found that the middle (15 grams) and highest dosages (24 grams) resulted in blood glucose reductions of between 33-44%. The “intermediate dose” of chia also prompted a 47% drop in hunger levels. (3,4)

This was a shorter term study, involving only 10 test meals. No measures regarding weight loss or general health status were taken into account. But there was a similar, longer-term experiment published in November 2007 in the journal Diabetes Care. That trial lasted 12 weeks and examined the role that chia could have in a group of twenty type-2 diabetics. Wheat bran was also employed in that study as a means of comparison. On average, the typical daily intake of chia was 37 grams. During the course of the experiment, all of the participants continued to take their prescribed medications and followed a diet recommended by the Canadian Diabetes Association. (5,6)

This is obviously a very encouraging study. But I noticed something interesting in the details of the prior two (successful) trials. The first is that they both used a particular brand of chia seed (Salba). Also, the two positive human studies were conducted by the same lead researcher (Dr. Vladimir Vuksan) at the same research facility (St. Michael’s Hospital in Toronto). The relevance of these two factors is uncertain. Does this mean that this particular product is somehow superior, as the manufacturer claims? It’s difficult to say at this point. But there is some evidence to suggest that different growth environments can influence the composition of chia seeds. (7,8)

Something else to consider is that chia may preferentially benefit those eating high calorie/carbohydrate diets. A study from January of this year found that adding chia seeds to the feed of rats given a “sucrose-rich diet” prevented many of the harmful cardiovascular effects and the expected rise in insulin levels due to insulin resistance. A reduction in visceral fat deposits was also detected in the chia fed rats. This is certainly promising, but at this point, I must conclude that more research is required to clarify the blood sugar and heart health related consequences of chia supplementation in humans. (9)

My sincere hope is that we’ll all benefit from more reliable and thorough scientific inquiries into these ancient seeds. It could be that Salvia hispanica will one day turn out to be a therapeutic tool in the fight against breast cancer. (10) Or perhaps eating chia isn’t the best way to derive its benefits. Poultry scientists are currently examining the possibility of using chia seeds as chicken feed, in order to produce chickens and eggs that are lower in cholesterol and higher in omega-3s. Will chia seeds be just another health food novelty or a gift from prior civilizations that improves the health of future generations? Only time will tell. (11,12)