One of the hottest trends in the alternative health community is raw foodism. This term encompasses many different practices and philosophical beliefs but, for the purpose of today’s column, I’ll focus on a segment of this lifestyle commonly known as “raw veganism”. Vegans make it a point not to include any animal products in their diets – no chicken, dairy, eggs, meat or seafood. Those practicing a raw lifestyle take it one step further and attempt to primarily eat uncooked and unprocessed foods. It’s a challenging diet that some outsiders view with admiration, while others see it as a fanatical way of living. 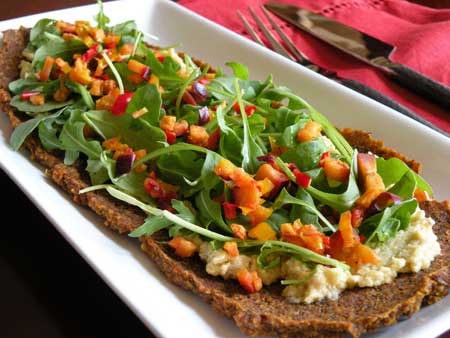 My goal today is not to pass judgment on the philosophical or spiritual aspects of adopting a raw food diet. Instead, I’d like to simply examine some of the research that’s been conducted on this type of menu. By looking at the science behind this holistic movement, I think we can better understand it’s health promoting appeal or lack thereof.

A very interesting study conducted by researchers at Columbia University was published in April 2008. The intent of the trial was to determine the physical and psychological impact of a raw vegan diet on a group of patients residing at a holistic retreat (the Hippocrates Health Institute). On average, the visitors stayed at the clinic for 1-3 weeks. Blood tests and questionnaires were administered upon arrival and 12 weeks afterward. Here’s what the researchers of the study discovered upon reviewing that data:

The results were mostly positive. The improvement in psychological health was a desirable change, but the lack of effect on inflammation and the minor decline in immune function were disappointing to proponents. (1)

The October 2005 edition of the Journal of Nutrition investigated the effects of a raw vegan diet on cardiovascular risk factors. The definition of a raw food diet in this study was a menu plan consisting of 70% – 100% raw plant-based foods. 201 men and women participated in this German experiment. Blood tests were conducted on all of the participants in an attempt to determine whether their diet was affording protection against heart disease.

Once again, a mixed bag of pros and cons. (2) Many doctors believe that lower LDL levels are health promoting – though this is an area of great complexity and controversy. Nearly all physicians agree that lower levels of triglycerides is a healthful goal. On these two counts, the raw food dieters appear to be in good shape. But the dangers of inadequate HDL “good” cholesterol and vitamin B12 is associated with increased heart attack and stroke risk. Low levels of HDL cholesterol and B12 deficiencies are common characteristics of both raw and conventional vegan diets. (3,4,5,6,7,8)

What I’d like to see is a scientific study that explores the potential of a raw, lower-carb diet on cardiovascular health. Recently I reported on a carb-restricted vegan food plan coined the “Eco-Atkins” diet. That version of a vegan diet brought about impressive reductions in LDL and total cholesterol while increasing the beneficial HDL cholesterol. In addition, blood pressure levels fell as well. (9) 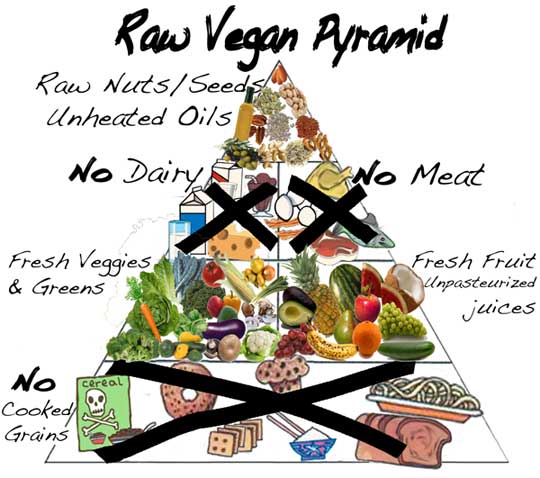 Besides heart disease prevention, there are other health related reasons that prompt some people to adopt an uncooked diet. Certain pain related conditions such as fibromyalgia and rheumatoid arthritis appear to respond reasonably well to short term raw veganism. (10,11,12,13) It’s important to note that many of these menu plans focused on more exotic items such as fermented foods, which provide probiotics (beneficial bacteria). Probiotics, in and of themselves, have exhibited anti-inflammatory and immune modulating properties that may have contributed to the benefits in these patients. (14,15,16)

The trouble with trying to define the superiority of a raw diet vs. a mixed diet (cooked and raw foods) is that scientific studies provide no consistent support for it. Some research clearly indicates that specific foods, such as broccoli/cruciferous vegetables and garlic, can be more health promoting if they’re consumed in a raw state. (17,18,19) But other studies have found that cooking different types of vegetables (such as artichokes, beans and green leafy vegetables) may actually increase the levels of beneficial components. (20,21,22) To further complicate matters, some laboratory trials can’t find any discernible difference between foods, such as almonds, that are consumed in a raw or roasted state. (23)

These inconsistencies as well as a 2005 study linking raw veganism to lower bone density has led some natural health authorities, such as Dr. Andrew Weil, to conclude that it’s probably best to eat a variety of fresh, raw foods and healthfully prepared cooked items as well. (24,25) This is, essentially, my position as well. I personally have great respect for anyone who adopts a positive, challenging way of life based on strongly held beliefs. I can’t say that I can fully endorse a raw food diet at this time. But I’ll continue to look into this matter with an open mind and receptive heart. As I learn more about this unique way of eating, I will certainly share any changes in my position with you.