The fruit of the tree is what first catches the eye. Then the mind begins to anticipate the satisfyingly sweet flavor and fragrant scent that is unique to fresh ripened fruit. However, it’s pretty rare that we ponder the intrinsic value of the other parts of bushes, plants and trees. Without leaves, roots and stems there would obviously be no fruit to bear, but that’s about as much consideration as most non-botanists give to this topic. Fortunately, research scientists are a different breed. They look at the same tree and wonder about the chemical make up of all the inedible parts. They understand that the next big breakthrough in the management of cancer, diabetes, heart disease or virtually any health condition may be found in the less conspicuous regions of the natural world. 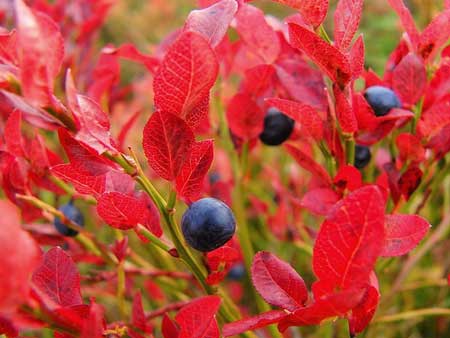 The next time you browse around your local health food store, keep an eye out for blueberry leaf extract. You read that correctly – leaf extract. In recent years, much acclaim has been bestowed upon blueberries. This is completely justified. The tiny purple gems are, without question, one of the most health supportive foods available. But what is not commonly known is that the leaves of the blueberry bush also provide separate and distinctive advantages over the fruit.

In 1927 a correspondence was printed in the Canadian Association Medical Journal. It describes the early stages of testing on a new diabetes “drug” derived from blueberry leaf. The results of those early experiments were mixed at best. But the beautiful thing about science is that a temporary failure or setback doesn’t necessarily mean that an entire line of study needs to be abandoned. In the latter part of the 20th century, researchers began to better understand how and why blueberry leaf extracts could aid diabetics and others with blood sugar disorders. (1,2)

The key to discovering the relevance of these therapeutic leaves was to first determine what they’re made of. Laboratory work determined that the leaves of the blueberry bush are significantly richer in antioxidant content (phenolics) than the berries themselves, giving them a greater ability to counteract damaging free radicals (ORAC). (3,4)

The leaves were also found to contain certain phytochemicals, such as chlorogenic acid and myricetin. These and other naturally occurring “plantioxidants” are known to possess a broad spectrum of anti-diabetic properties. (5,6,7,8,9,10,11,12) Some of the mechanisms by which they work include: decreasing sugar production in the liver and reducing sugar uptake in the intestines, inhibiting the digestion of carbohydrates, protecting insulin producing cells in the pancreas and supporting insulin sensitivity. (13,14,15) In addition, it appears that these very same antioxidants help reduce some of the cellular harm that is a common consequence of diabetes. One example is demonstrated with regard to Advanced Glycation End products (AGE). These are detrimental substances that are generally more pronounced in diabetics and likely contribute to the development of chronic inflammation, heart disease, neuropathy (nerve pain) and retinopathy (eye damage). (16,17)

Properly managing blood sugar levels helps diabetics ensure a healthier heart and protects against many chronic health conditions associated with the disease. The same is true for the population at large. If I were to describe one of the healthiest changes most people could make, it would be this: Live your life as though you had diabetes. Eat a diet that prevents wild blood sugar fluctuations, exercise regularly, maintain a healthy weight and practice stress management. To that list, you may want to consider adding blueberry leaf extract – especially if you’re concerned about your cardiovascular status.

In 2006, a 4 week study was conducted on 42 middle-aged diabetics. Half were given a blueberry leaf extract (300 mg three-times daily). The remainder received an inactive placebo. The respective “medications” were taken 15-30 minutes prior to each meal. Significant improvements were only found in the blueberry leaf users. A 27% reduction in fasting blood glucose and an almost 60% decline in C-Reactive proteins were noted. A number of markers associated with diabetic wellness and liver health also showed signs of improvement (plasma enzymes ALT, AST & GGT). Several other experiments have found similar results in animal models of diabetes. These trials also indicate a potential hypotensive (blood pressure lowering) and triglyceride normalizing effect. (18,19,20,21)

The future appears to be quite bright for blueberry leaf extract (BLE). This past month, a study published in the Journal of Biological Chemistry found that a concentrated and purified form of blueberry leaf could prevent the replication of the Hepatitis C virus. This is great news for the nearly 200 million people worldwide who have chronic Hepatitis C – a slow progressing, infectious liver condition that can lead to cirrhosis (liver scarring), liver cancer and/or liver failure. (22,23) There’s even some evidence that suggests applications for BLE in the field of cancer research. Preliminary research hints at BLE’s potential in the management of colorectal, liver, lung and ovarian cancer and perhaps even leukaemia. (24,25,26,27,28)

In the years to come, it wouldn’t surprise me to read reports about other neglected plant parts that are “discovered” to possess truly wondrous healing properties. Out of curiosity, I did a brief search of the medical literature on “strawberry leaves” and found that they too have a lot to offer. It seems as though they might one day be used to help promote healthier circulation in those with heart disease. In fact, a brand new study determined that strawberry leaves had a very similar affect as the tried and true natural heart remedy, hawthorn extract. Additional scientific inquiries into both blueberry and strawberry leaves are sure to come. I’m thankful for that and I hope that aspect of human inquisitiveness will never end. (29,30,31)