Herbs and Spices of Life

It’s a happy occasion when I can recommend something that is not only genuinely health promoting, but also pleasurable and simple to enact. Too often, eating a healthy diet can seem complicated and, even worse, not very enjoyable. When we remove all the “bad” things from our diets, sometimes a void is left. One solution is to turn up the volume on flavor by incorporating natural seasonings that are actually good for you. Adding fresh (or even dried) herbs and spices is one of best ways to increase levels of protective antioxidants in our daily routine. There’s also a little known secret contained in many of these savory plants: they’re actually powerful “phytomedicinals” (plant medicines) in disguise. 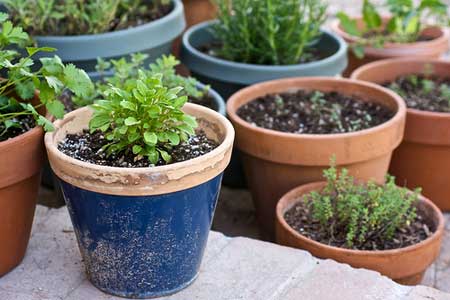 In recent years, science has focused more and more on the role of dietary antioxidants and their contribution to the fight against just about every major disease known to man. That’s a big part of the reason why dietitians and physicians are so vehement about recommending that we all eat plenty of fresh fruits and vegetables. But you might be surprised to know that there are much better sources of antioxidants out there. I’m specifically referring to culinary herbs and spices. In 2006, a review looked at the antioxidant value of 50 popular foods. The top 13 on the list were herbs and spices. Chocolate, coffee, fruits, nuts, seeds and vegetables all scored highly as well, but they were a distant second to the seasonings that are often used to flavor them. (1)

Scientists aren’t suggesting that we switch out broccoli for a bowl of cilantro or thyme. But they are saying that we can substantially increase antioxidant intake by adding herbs and spices to the common foods we already eat. Research published in 2005 in the British Journal of Nutrition found that simply adding a tiny amount of marjoram to a normal salad could boost the antioxidant content (ORAC score) 4-fold. This kind of dietary boost can have far reaching benefits. One area of interest is the protection that such antioxidants may provide against a variety of cancers and other diseases that are influenced by the oxidative damage we’re constantly exposed to through environmental insults and poor lifestyle choices. (2,3)

Origanum majorana, also known as marjoram, is a culinary herb that is native to the Mediterranean region. It plays a part in seasoning blends from around the world, such as the famed Herbes de Provence and Za’atar (a Middle Eastern spice blend). Marjoram imparts a delicate oregano-like flavor that is well suited to dishes that feature meat or strictly vegetarian fare such as roasted vegetable soups. (4)

On the medicinal front, scientists have discovered that marjoram can help support the health of the digestive system. Specifically, it appears to protect against the intestinal damage caused by excessive gastric acid production. Such harm can ultimately result in the formation of a peptic ulcer. The interesting thing about how marjoram works is that it doesn’t seem to negatively impact the normal secretion of necessary digestive acids and enzymes such as pepsin. It does, however, combat H. pylori infections which is a primary cause of gastric cancer, GERD (gastro-esophageal reflux disease) and ulcers. (5,6,7,8,9)

Sage (Salvia officinalis) is technically a member of the mint family. However, its application in cooking is quite different. Sage is often added to marinades, sausages and as a simple, but elegant, enhancement to various pasta dishes. I recently found an intriguing recipe that uses the leaves of Salvia officinalis as a sort of breading for an intensely flavored bite-sized treat. An anchovy fillet is placed between two sage leaves and gently cooked in a butter and olive oil mixture until crisp. Two or three of these sage “sandwiches” can then be placed on a bed of mashed cauliflower to create a delectable appetizer. (10)

In the medical community, sage has attracted a lot of attention thanks to its apparent ability to support improved cognitive function in both young, healthy adults and older individuals with serious forms of memory loss. The results of sage supplementation can come about relatively quickly (within hours) or remain present in longer term studies (lasting up to 4 months). Besides its memory enhancing effects, sage has also demonstrated mood elevating properties. These are generally described as feelings of “alterness”, “calmness” and “contendedness”. This herb appears to function similarly to certain drugs that are used to treat dementia, but it has also demonstrated neuroprotective activity which can shield the brain from age-related degeneration. (11,12,13,14,15,16,17)

Possible Mechanisms for Cancer Protection by Herbs and Spices

The next time you make deviled eggs, you might want to add some tarragon to perk things up. Artemisia dracunculus, sometimes referred to as “dragon herb” or tarragon, makes frequent appearances in French kitchens. It is a key component of the rich and luxurious Bearnaise sauce and even plays a prominent role in a green tinged, sweet soda (Tarhun) sold throughout Russia. (18)

An advantage of using tarragon regularly is that it just may help to regulate your blood sugar levels and insulin production. In fact, the majority of research conducted on this botanical has to do with its effect on diabetes. Studies harkening back to the mid 1980’s have established the effect of tarragon extracts on lowering blood sugar. More recent trials have examined exactly what components are responsible for its anti-diabetic activity. Thus far, the results point to at least 6 different chemicals which appear to “improve carbohydrate metabolism”. (19,20,21,22,23)

I chose to point out marjoram, sage and tarragon because they possess some of strongest antioxidant activity among foods commonly consumed in the average diet. Based on ORAC (oxygen radical absorbance capacity) value, marjoram is about ten times more powerful than spinach, sage outperforms green peppers by about 30 fold, and tarragon demonstrates about five times the antioxidant protection of broccoli. These figures are based on a 100 gram serving size (roughly 3.5 ounces). It’s unlikely that any of us will eat such a large serving of these herbs. But we can very easily add more of them to our favorite dishes. By doing so, we’ll not only liven up otherwise bland menus, but also protect ourselves in ways known and yet to be discovered.


14 Comments & Updates to “Herbs and Spices of Life”