Anti-aging products are big business these days. This isn’t a new trend, but it’s an understandable one. The fact is that, statistically, we’re living longer than ever. Unfortunately, we’re not necessarily living healthier. It’s nearly impossible to avoid the ubiquitous toxic elements present in the environment. In addition, most studies tell us that psychological angst and stress levels are on the rise. But, no need to despair. We simply need to understand which lifestyle choices promote longevity and focus on making them a bigger part of our daily routine. One practical way to do this is to regularly drink (or supplement with) green or white tea. 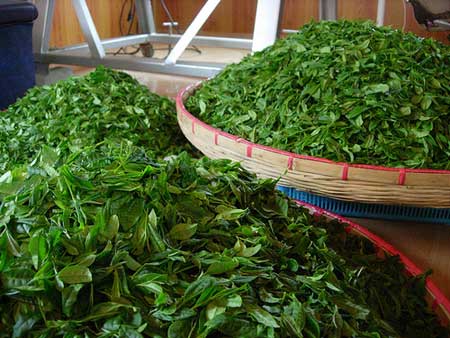 A recent Japanese study examined the relationship between green tea consumption and the risk of “all cause morality” in a group of over 14,000 senior citizens. Over the course of 6 years, it was determined that those who consumed the greatest amount of green tea were least likely to die from all causes and, in particular, as a result of cardiovascular disease or colorectal cancer (two common causes of death in this age category). That’s obviously great news, but what most of us strive for is to live better, not just longer. (1)

One the first signs of aging are changes to the skin’s health and appearance. This is, obviously, why there are literally thousands of creams, lotions and serums targeted at age spots and wrinkles alone. A new experiment from Kingston University in the UK is adding to the current level of knowledge about antioxidants and their potential role in keeping skin looking more youthful. There are two proteins that are key to a soft and wrinkle-free skin: collagen and elastin. As we age, these proteins increasingly break down, which results in negative consequences for much of the connective tissue in the body. Sites that are frequently affected include arteries, cartilage, gums, ligaments, lungs and skin.

23 different herb and plant extracts were tested to determine their ability to inhibit the enzymatic breakdown of collagen and elastin that normally occurs with aging. Of all of the plants tested, white tea was shown to be the most effective. (2) According to the authors of the research, it appears that even small amounts of white tea inhibited an inflammatory process that promotes damage to the proteins found in connective tissue. It’s interesting to note that white tea performed significantly better than green tea. White tea is a younger, less processed version of green tea which is higher in select “plantioxidants”. Here are some of the highlights of the research:

There are additional questions that need to be answered with regard to tea consumption and skin health. For instance, a newly published study didn’t find much long term benefit in a group of women who supplemented with green tea extract over a 24 month period. This could be a question of inadequate dosage or perhaps the participants would have had better results if they had used white tea instead. It’s also possible that applying green tea topically may be a more direct and efficient route to promote healthier skin. (3,4)

Advancing age affects the skeletal structure of the body as well. A far too common example is found in older men and women who lose height or begin to slump over in senior years. There is a naturally occurring chemical in green tea that may help to forestall this process. New research presented in the Journal of Agricultural and Food Chemistry determined that epigallocatechin (EGC), an antioxidant (polyphenol) found in green tea, can help deter bone degeneration and encourage bone mineralization in a laboratory setting. Population studies on older women and trials conducted in animal models appear to support these most recent findings. (5,6,7,8,9,10)

Forgetfulness is yet another way in which age reveals itself. It may not be as obvious as the outwardly signs of maturity, but it’s at least as important. Several scientific papers published in the past few months suggest that tea ought to be the beverage of choice for those concerned about age-related cognitive decline. The mechanisms by which green tea extract (GTE) exert these positive effects are numerous:

In addition to the benefits I’ve already listed, it’s been reported that drinking plenty of green and white tea may also promote a healthier weight. That’s a struggle that rarely improves as people grow older. (16)

In closing, here’s a new tip about how to get the most out of the tea you drink: Eat antioxidant rich foods (like red onions) or take antioxidant supplements along with your tea. The July edition of the journal Phytotherapy Research suggests that doing so will help your body absorb and utilize more of the therapeutic substances in this healthy brew. I don’t know about you, but I’m feeling younger already! (17)